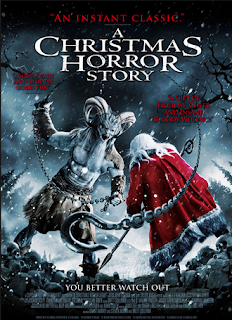 It’s Christmas Eve and it’s a time for good cheer and excitement for most people. For a small group of people in the same town though, this year is going to be a frightmare of shock and terror. Whether it’s the haunting ghost of a young girl at the school, the mysterious return of a lost child from the forest, a family stalked by a vicious monster, or a Santa who has to battle off ‘infected’ elves, this Christmas is going to be one for the books. Just not for merriment.

The best aspect about A Christmas Horror Story is that it gets four very different style horror stories into the mix of the film. A ghost tale, a monster flick, a zombie saga, and a killer kid story all make for a well rounded horror viewing experience. While the connections between the various tales are fairly surface level at best and lack the inter-connectivity that Trick R Treat pulled off so well, the stories themselves are pretty well developed and fun. Even the William Shatner powered framing device, which seems detached from the rest of the stories initially, makes a wicked comeback spin to fit right in as a solid twist in one of the stories and it might be the best surprise that this film has to offer.

There is always going to be spikes and dips of quality in any anthology film depending on each story. It’s no different in the case of A Christmas Horror Story. The Santa Vs Zombie elves piece is the most memorable story with a fun performance, swearing zombie elves, and a final fight that any B-grade action fan will be excited to see, but the other stories can be a bit more hit and miss. The ghost story delivers some great atmosphere and some gruesome bits although it’s a bit cliché, the Krampus attack lacks a bit of build for us to care entirely about the family (although it works in the kind of humorous gimmick that made Tales from the Crypt episodes so much fun), and the ‘what’s wrong with my kid’ portion tends to end with a whimper compared to how well built it was for a short film. Luckily, none of the stories are a dud, but only the Santa one is the outrageously fun one that is given a home run by a great finale.

All in all, A Christmas Horror Story is a blast to watch though. The stories are all well done for the most part and they hook the viewer as the film leaps between stories to keep the structure of the film as a whole moving in the same bursts and build for the audience. It’s not a perfect anthology flick, but four diverse stories partnered with some great Christmas atmosphere make for a very entertaining film that ought to become a holiday favorite for genre fans.