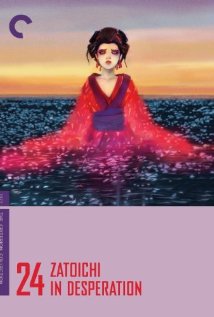 Zatoichi (Shintaro Katsu) has always attempted to be a good man, but in trying to help out an old woman on her way to see her daughter his kindness invokes tragedy. Feeling guilty for it, he seeks out her daughter to free her from her debt to the local yakuza boss and set her on an honest path. However, his reputation (and bounty) follow him to the town.

Even from the opening credits, Zatoichi in Desperation goes for an artful grittiness to the film with its black and white credits before heading into the opening scene. Even though I remarked that the last film (see my review for Zatoichi at Large) marked a turn back to the basics of the franchise, this film takes it even a step further. Perhaps this is due to the intimate nature that Katsu has with the character, having portrayed him for years and dozens of the films, but he takes the tone and feeling of this film back to its roots in full. Like the early films of the series, Zatoichi in Desperation is a volatile mix of art, grindhouse, emotion, and minimalism in its style with just a hint of the 70s era violence for good measure. Rarely does the film go for the humorous moments, but it retains the charm of the franchise and of the anti-hero elements of the character. Perhaps the best part about the plot and narrative though is that Katsu takes a fairly simple story and uses visual storytelling to deepen the effect of its dialogue and characters. He’s not afraid of keeping odd things in and out of focus on screen, keeping the lighting in stark contrast, and throwing in some emotional twists to keep the audience on their toes. Not to give anything away, but this film does not hesitate to kill off important characters and it creates a film that has a sense of consequence that a lot of the other entries have lost over time. This allows what might have been a gimmicky and mundane third act (Oh, Zatoichi has to fight off another horde of yakuza?) to be artful and still viciously violent with its meaning. It’s ridiculously effective in the blend of artful approach and grindhouse aspects.

However, there is one aspect that feels like it didn’t hit as effectively as it could have. Throughout the film you are introduced to a young woman and her baby brother who work at the brothel that Zatoichi is trying to free another young woman from. Her story arc is effective and the performances are stellar, particularly when it comes to scene where her brother stands up to one of the yakuza men threatening some fishermen. However, it doesn’t quite make a connection with Zatoichi’s tale in the film. There was this expectation that at some point the two stories would make a turn and intertwine, but it never really happens. There is some parallels between the two and both are emotionally real in how they play out – but they never come together like it might have…which leaves one wondering if it was meant for something more or not.

Outside of that one qualm, Zatoichi in Desperation marks a stunning entry into the series with its stripped down and emotive punch. It hits all of the better qualities of the films and then adds in a bit of 70s style genre effect to really hit home the grittiness and dark qualities of the characters and story. This is certainly not a film for everyone, nor even all fans of the series depending on what qualities you enjoy best in the franchise, but for this reviewer it marks one of the best of the 24 films I have seen.