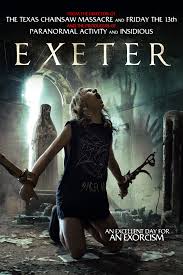 Patrick (Blatz) has been helping Father Conway (Lang) clean up an old asylum lately for the church, but when he lets his friends know about the place they quickly decide to throw a massive party. At the after party though, Patrick, his younger brother, and a handful of his friends find out that there is more to this abandoned asylum then what they thought…and whatever it is it’s out for blood.

Exeter is a slew of different (and superior) horror films all smashed together. A little bit of Evil Dead, a pinch of Exorcist, a touch of House on Haunted Hill, and just a bit of slasher are all represented in this film. As exciting as that may seem considering the kinetic energy that Nispel would bring to the table, trust me when I say that it’s more or less a clusterfuck. It’s not that Nispel doesn’t attempt to make it work with a pacing that moves at just below ‘speed of light’ and enough attempted humor pieces to keep it from getting too serious, but Exeter simply can’t handle it all with the care it needs. Most of the tension of the haunting elements is lost, some of the scares of the possession are lost, and any kind of connection to the characters is lost. I guess to put it simply, Exeter is a film of pieces all lost in the shuffle.

So what good is there to the film? Well, not a whole lot. Nispel does bring a manic energy to the proceedings, an energy that is desperately needed to navigate as much shit as it throws at the audience, and the production values are rather impressive. The film looks like a Nispel film with its crisp attempts at looking grungy, if that makes sense. Some of the humor works, but unfortunately most of the characters do not as we run into all of the clichés there too. In fact, most of the characters are just down right annoying. It was a pleasure seeing them die in a lot of ways even if some of the kills were not all that satisfying for the horror fan in me.

If you are not a Nispel fan to begin with, then I certainly do not recommend Exeter in any way, shape, or form. It’s about as Nispel as you are going to get when it comes to his style. If you are, I still am not sure I would recommend this above a free viewing on Netflix Streaming if you have nothing else to watch. It’s just not nearly as awesome in its blend of genres as one would hope. So take it with a grain of salt, but if you want to watch a clusterfuck on film, feel free to dig in. Otherwise, it’s a skip.