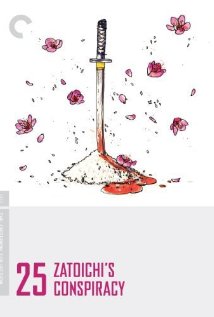 By chance of fate – and the flip of a coin – Zatoichi (Shintaro Katsu) is off to visit the hometown that he grew up in. As it happens there is also a childhood friend, now a big business man, returning home with a gift in hand. However, when Zatoichi uncovers a much bigger conspiracy in the making, including some local yakuza and the magistrate, he’s going to have to do what he does best: set things right.

Zatoichi’s Conspiracy, despite its bigger than life title would suggest, is more of a grounded film than some of the previous entries we have covered here at Blood Brothers. As I mentioned, it features a rather reflective tone to the picture as Zatoichi comes home to find the woman that cared for him has passed and his old house lies in shambles. He finds that his home is no longer a home and that his connection to the past has somehow been corrupted – as his childhood friend quickly becomes the film’s villainous foe powered by greed personifies this tone. This is your basic Zatoichi premise though and instead of pining for the things he cannot have (he even makes mention that at one point he wished he had sight, but quickly dismisses the idea) he steps up to the plate for the villagers and stands up against the conspiracy against them. It’s not a story we haven’t seen in bits and pieces throughout the series though and often enough it’s fairly predictable in its narrative.

Director Kimiyoshi Yasuda returns to the series one last time (having directed some of the best of the series and some of the worst) and this time he has to almost carry the film. It always helps that Shintaro Katsu eats up scenery in the role and the film has a solid third act of action going for it with some fun bursts of gore, but really it’s the visuals and often somber tone of the first half that carries Zatoichi’s Conspiracy. The script is a bit too hit and miss, failing to capitalize on the brother/sister relationship that Zatoichi forms and the rebellious teens that eventually become his pseudo-entourage and instead focusing on the formula, but the combination of Yasuda and Katsu make sure that Zatoichi fans will be pleased with the film in the end.

Like the rest of the series, this finale sticks to its guns to a fault and outside of some great action set pieces, fun performances, and solid directing, Zatoichi’s Conspiracy tends to be one of the films that will fall to the middle of the pack in the end. It’s not bad by any means, I still had a lot of fun with it, but it’s ultimately not all that memorable for fans.

Still, I’m going to miss discovering each new entry in this long running series. Who knew that when I started it, it would make such an impact on me? Guess I’ll have to go dig up the TV series that followed this film now and keep my addiction going.

Written By Matt Reifschneider
Posted by DarkReif at 9:48 PM