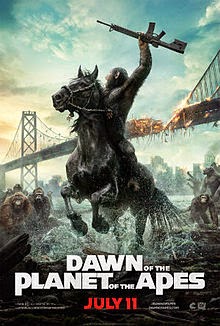 The Planet of the Apes franchise has had its ups and downs over the decades. Just the original series couldn’t seem to find consistency through five films and the first attempted remake by Tim Burton saw the series lose almost all of its social commentary for a more action oriented flick with off putting humor. Luckily, the latest reboot of the series (starting with 2011’s phenomenal Rise of the Planet of the Apes) put the franchise right back on track. Despite my high expectations for the Matt Reeves’ helmed follow-up Dawn of the Planet of the Apes, this latest entry into the long running science fiction series is even better. In fact, it’s one of the best. It’s a film that, like the original, has strength and universality in its script along with perfect execution in the approach. Not only is it one of the best films of the series. It’s the best film of the year thus far.

The Simian Flu has almost wiped out humanity. The aggressive tactics of the human race trying to restrain it pushed then further towards oblivion. It’s been ten years now and Caesar (Serkis) has established a nice little colony of intelligent apes in the forests of California. When a group of humans attempt to restore power to their city with a dam near Caesar’s colony, the thoughtful ruler with have to navigate a fine line between forces that seem destined to send them to war.

The key to a great summer blockbuster like Dawn is balance: a balance between characters, balance between plot and action, balance of intelligence and entertainment, and a balance tension and relief. Dawn not only succeeds at this precarious balancing act, but delivers above and beyond on all of the elements while doing so. For all the big films this summer (and this year), Dawn is perhaps the best and most well rounded film I’ve seen.

Most of the film’s success starts with the writing. Rise was a film that was able to notably blend science fiction entertainment with heart and some strong social subtext. Dawn is the natural progression of that. It’s more entertaining, filled with bigger emotional beats, and a more aggressive subtext. The story is mostly told from the ape perspective with Caesar and his clan consuming an admirable amount of screen time as opposed to their human counterparts. Themes of loyalty, family, and trust run heavy in the character interactions and emotional beats as the film focuses on really fleshing out the foundational emotion of the science fiction built plot. It’s a ballsy move by the film to give so much depth to a slew of computer-animated characters (although the mocap here is phenomenal and both Serkis and Kebbel probably deserve Oscar nods for their portrayals of the apes), but Dawn succeeds here. Never have I felt an emotional connection to CGI in a film like I did here. It’s more than impressive.

While the plot might serve to hit some pretty basic formula’s overall, the execution of these beats is top notch. When the film needs an impactful moment, Serkis delivers. When it needs tension and suspense, Reeves slathers it on with strong visual pops including an exceptional hide and seek moment when the human leader is trying to take some surgical supplies out of a building that’s ape occupied.  When the film kicks into action mode in the last act building to Caesar’s return…the special effects amaze. Through and through, Dawn simply comes through and delivers the goods.

Say what you will about the Planet of the Apes franchise and whether you like it or not, but Dawn of the Planet of the Apes establishes a new watermark for the series. The balance is perfect. It’s thoughtful in all aspects of its execution in writing, visuals, and depth. All I was left with by the end of the film was a need for more…for which I’ll have to wait a couple of years to get when the next entry debuts.

Written By Matt Reifschneider
Posted by DarkReif at 5:54 PM