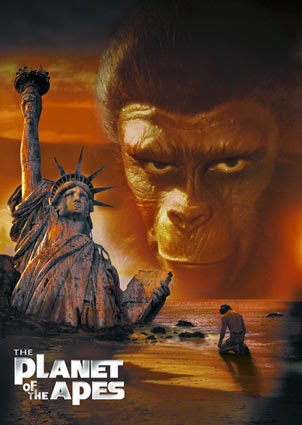 From the time I was a little boy, the original Planet of the Apes always fascinated me. It was a combination of big concept entertainment, cheese, and it had great special effects. I mean apes with guns who rode horses? How cool was that?! As time has gone on though, the depth of this film and the impeccable commentary that was buried in the entertainment and often-cheesy performance from Charlton Heston has wormed its way to the surface of my understanding. Planet of the Apes is the kind of film I enjoy now just as much as I did as when I was a kid, but now for different reasons.

A long journey into the depths of space has left a small group of astronauts thousands of years into the future. Lead by their rough edged captain Taylor (Heston) their ship crashes onto a planet where the air is breathable, but survival seems rough. Particularly when they find out that humans on this planet are treated like animals by the more intelligent and developed species…apes.

As I mentioned in my introduction, the brilliance of Planet of the Apes lies in the layers of the film. Sure, guys in costumes parading about on horses living in a society where man is lower rung on the evolutionary ladder is fun to watch as a 60s science fiction flick with its quirky soundtrack and smarmy performance from Heston. Yet the film does an admirable job at really digging into the material. With a script co-written by one of the greatest science fiction writers of all time (the brilliant Rod Serling), Planet of the Apes injects a ton of social commentary about the arrogance of humanity as dominant rulers of our planet and throws in a ton of subtext about the balance of science and religion within culture. This is truly the heart and soul of why this film has gained a universal influence over the years and why a film about man’s subservience to apes isn’t nearly as cheesy as it can be.


This, of course, is not the entire release why Planet of the Apes is so successful. Despite some of the cheesy elements of the film, it carries a significant amount of charm. It’s not a wholly action packed film (this was a day and age when science fiction was it’s own genre and not a subgenre of action films like it is now), but the film moves at a thrilling pace blending some chase sequences into the heavy concept. While I’m not fully convinced of Heston’s acting chops here, the writing does specifically keep his character’s past decently vague, the supporting cast is phenomenal. Especially those required to act through an ape mask like the awesome work of Kim Hunter and Roddy McDowall as our human loving chimps. To be honest, all of it works in fantastical conjunction.

Nostalgia might play a role in my immense love for this film, but even the film critic in me sees the universality of this classic science fiction romp. It’s a fun film, cheesy at times in the perfect 60s sort of way, but the depth of the script and the memorable characters make Planet of the Apes a film that will last 2,000 years.