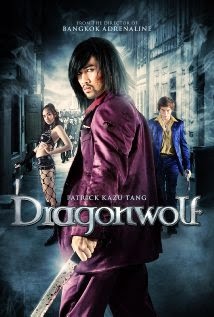 There have been a decent amount of low budget B-grade action flicks in the last year that have entertained me and I’m always a sucker for a silly kung fu flick, but I won’t lie when I say that Dragonwolf tested my patience a bit. While I have yet to check out Bangkok Adrenaline from the director of this film Huber, I don’t think I will be anytime soon. Dragonwolf desperately tries to balance some of the silly martial arts elements of low budget Thai action and a more serious and theatrical beats of a gangster drama. The mix is astoundingly bad. It’s not bad enough to be tongue-in-cheek entertainment and it’s not good enough to sell the more serious tones. It rests in being a film that doesn’t seem to know what it wants to be.

Mozart (Tang) and Julius (Kirsten) have been friends and ‘brothers’ since they were children. Living on the streets and improving their fighting skills, the two start working for a crime lord as enforcers and drug runners and work their way up the ranks quickly. When a woman enters their lives and begins to tear them apart, betrayal and violence starts to find a way into their lives and Julius leaves Mozart for dead. Now Mozart must find a way to topple Julius and take his revenge, before it’s too late.

Dragonwolf too often plays out like a martial arts soap opera and it’s irritating. While the entire ‘vengeance in the name of love’ isn’t necessarily new for thrillers or kung fu films, when you throw as much bro love/hate and pining moments motivated by semi-romantic flashbacks as this film does, then it gets to be a little grating. To make matters even worse, the acting from all parties is about as hammy and forced as you can get. There are brief moments where some real emotion feels like it comes forward (Kirsten in his debut role has a few moments), but too often it’s ruined by some of the super melodramatic score or the copious amounts of needless nudity. At over two hours long, Dragonwolf could have cut a lot of the overly dramatic beats out and it probably would have doubled the entertainment of the film.

Truthfully, the only real thing that Dragonwolf has going for it is the action. The choreography from Tang (whom also plays Mozart) is pretty impressive overall. Whether it’s the style vs style of Mozart vs The Trio or the weapon battle towards the end, the action is pretty decent and fun to watch. The blood drops that this film earned come mostly for this aspect of the film. Now if only it didn’t drag on in between these set pieces and make me want to take a nap then perhaps this film would have been more enjoyable as a whole experience.

That being said, there is a campy aspect to Dragonwolf that might appeal to some people. The opening sequence (which features sepia tones and a shaman) is delightfully bad and invoked quite a few laughs from me. The unintentional hilarity of some sequences does have its place in the cult world and many will dig into that portion of the film. I can’t say that I didn’t occasionally find this film funny, even with it’s very, very serious approach. So it does have that going for it.

Otherwise, Dragonwolf is perhaps one of the worst action films I’ve seen all year. Its one saving grace is some decent action set pieces, but the rest of the film is a chore to work through. As a Z-grade flick, it might have its place as a bad flick for some folks, but even then I was having trouble choking it down. So be warned, Dragonwolf is a film to very cautious going into…if you even want to try at all.