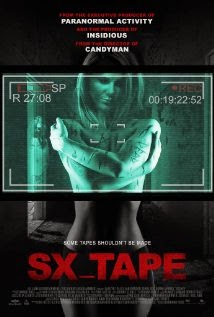 I like to think I’m the kind of film critic that is able to put aside my own distaste for a style and learn to look at it through unbiased eyes. Does the film utilize the style well? Does it accomplish what it attempts to accomplish? For found footage horror, there has been films that do raise the execution above the general shitty reputation to receives. For a film like SX_Tape though, there are not a lot of redemptive qualities for it. It’s generic with little in the way of scary elements and the story is just a basic combination of found footage horror mixed with the haunted hospital setting. In fact, some of the plot progressions come off as almost offensive in their stupidity.

Jill (Folley) and Adam (Duncan) are attempting to prep her artwork for a show. When they discover an abandoned hospital, they decide to check it out to see if maybe it would be the edgy place for her edgy artwork. Things take a turn for the worse when two of their friends show up and tensions mount as Jill begins to act stranger and stranger.

The biggest issue with SX_Tape is that is sits precariously on top of a double-edged sword. On one hand, it does an admirable thing by keeping the plot decently vague so that the viewer can figure and put things together on their own. On the other hand, the story is so bare in quality writing, characters, and dialogue that I wasn’t even interested in putting any effort into understanding or caring about what was happening. By the time that the two friends show up and the four head back into the hospital (?!), I was a bit confused by the asinine progression the plot was going. By the time they introduced a love triangle with the characters (all of whom turn out to simply be giant assholes as people) I felt like turning off the film. Not only did the plot seem to be going nowhere, but there was no redemptive qualities in any of the dumb decisions for the characters. There was no reason for me to keep going.

I did though. Tricking myself into thinking that perhaps, just perhaps, there was an ace in the sleeve for the ending. There’s not. No final twist. No sweeping moral highlight. No purpose. I even thought that there might be some kind of clever and brutal spin to the ghostly apparition that appeared (rarely) in the previous acts of the film. Well there is sort of a last scene with a brutal bit of violence, but it makes no sense and it’s not worth the time.

Considering that the director of this film delivered one of the great modern classics of horror in Candyman, I’m almost stunned at how inept this film was from the ground up. There are no scares, no characters to give two shits about, and no plot to wrap your mind around. SX_Tape is handedly the worst horror film I’ve seen all year and one that I highly suggest skipping for your own sanity.

Written By Matt Reifschneider
Posted by DarkReif at 11:04 AM