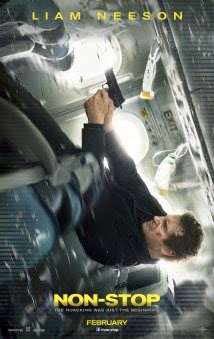 Say what you want about the most recent shift in Liam Neeson’s career after his turn for the badass in Taken, but it’s probably my favorite era so far. Sure the films are substandard overall in quality compared to his high class films like Schindler’s List, but the entertaining value of watching Neeson gravel talk and kick ass in a variety of ridiculous situations has me hooked. Even when the film is more suspense and thriller oriented, like Non-Stop, I find myself inherently latched into the film. His latest romp (more similar to his film Unknown rather than Taken) is not a great film. In fact, half of the ‘tricks’ and ‘red herrings’ of the mystery are pretty asinine. Yet, I was thoroughly entertained through and through by the Sherlock Holmes-esque tale.

Bill Marks (Neeson) has had a bit of trouble moving on with his life. Everything around him seems to be crumbling and he’s recently been stuck as a US Air Marshall despite his own fear of flying. On a non-stop flight from the US to London, Marks gets a mysterious text message. Someone is on the flight is going to kill a person every 20 minutes unless they’re paid. The clock is ticking and the space is small, but Marks is going to have to give more than he ever has if he’s going to stop the killer.

I’ve said it before and I’ll say it again: originality is not always needed for a film to work. Non-Stop is your basic murder mystery thriller that just so happens to have the gimmick of being set on a plane. It plays up cliché sets of characters (the overly stressed businesswoman played by Julianne Moore, the paranoid cop, the secret bad guy) and does it’s best to really give the audience a tough time in solving the mystery before Neeson does. Even Neeson is given a pretty cliché character as the alcoholic, rule breaking anti-hero that he has come to personify in the last few years. The writing is more or less forced through the motions and by the last act I sort of gave up in trying to sift through the red herrings because half of them were so outrageously thrown in that it felt like it didn’t matter. On paper, Non-Stop looks like a straight to home video thriller that you wouldn’t pay $10 for.


That’s on paper. The resulting film is actually much better than that. Between Jaume Collet-Serra’s direction and the charm of a stellar cast, Non-Stop is able to jump a lot of the potential derailing issues that plague the script. Neeson is again a massive screen presence, even as the same character we’ve seen a million times over, and the supporting cast is delightfully dedicated to selling their stereotypical roles. Collet-Serra, whom also worked on the mystery thriller Unknown with Neeson, adds a blend of modern spin to the classic murder-mystery plot with flair. Text message bubbles hang in the air, the cramped space of an airplane never gets repetitive, and he injects just enough tension that the few action set pieces pop effectively. In fact, an early fistfight in the airplane bathroom is a big highlight of the film with some great camera work and intense moments. Truly, the execution of Non-Stop carries the film to a much higher altitude than the script should have flown at.

There are sure to be those that really never get into Non-Stop with the very silly script and really strange (sometimes out of the blue) plot jumps, but if you want a fun way to kill a couple hours than Non-Stop will stamp your passport with its charm and strong visual flair. As a bonus, you get to hear Neeson rasp lines like “I’m not hijacking this plane. I’m trying to save it!” and “Am I in your way, asshole?” Just for those, Non-Stop is worth the price.