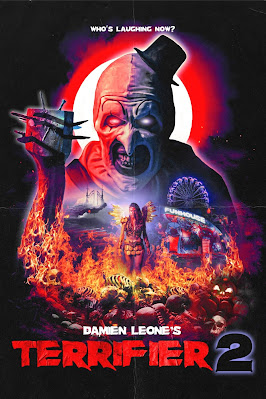 Although I was inherently struck with the original Terrifier with its stylish and utterly nihilistic take on the slasher genre, it’s a film I had not revisited since reviewing it for Blood Brothers in 2018. Not that it didn’t do an admirable job in modernizing the genre while simultaneously delivering a throwback 80s over-the-top slasher, but the genre just isn’t my personal favorite. However, the now infamously cult favorite villain Art the Clown did deserve a sequel in true slasher fashion, and the fact that it took 5 years for Terrifier 2 seemed like it was unjustifiably long.

It’s a damn slasher, how hard is it to write and direct a sequel? The first film was devilishly simple, so the sequel could do very little and still be successful.

Now that Art is back, returning with writer/director Damien Leone who gets his name above the title, it became very apparent why it was taking so long for Leone and company to deliver the sequel. Terrifier 2 is so much more than its predecessor. Not only does this brutal beast run a whopping 138 minutes (an unheard-of length for a slasher film) but it’s taking the franchise in some bold new directions. It’s still hitting the elements of success from its predecessor, but it’s smartly pushing the franchise forward into some gloriously delirious and vicious new places - and nailing it.

One might say that too often films sacrifice their simplicity for world-building in the sequel (that one is me - by the way), but in the case of Terrifier 2, it’s justified and oddly fitting. After a standard slasher opening - which finds Art the Clown surviving the events of Terrifier, obliterating the morgue attendant, and making his way to a laundromat, the film proceeds to spend a lot of time building up its protagonists some one year later. Art the Clown might be a major draw as such a strange and effective antagonist, but Terrifier 2 smartly builds protagonists to balance out the narrative.

Our teenage protagonists, blissfully looking age-appropriate, are Sienna and Jonathon. The brother and sister duo, played impressively well for a low-budget slasher by Lauren LaVera and Elliot Fullam respectively, are out to celebrate Halloween night, but Terrifier 2 spends a lot of time developing their relationship and building in a mysterious connection with the Clown Prince of Slash. Although most of their relationship runs the gamut of classic cinematic brother/sister characterizations (the loss of a parent, misunderstandings in miscommunication, bullies, etc.) it’s remarkably well crafted here for a slasher. It helps that the duo has some acting chops to carry the film through its tropes and the film has plenty of time to develop it - I did mention this thing is 138 minutes right? - but it’s still a pleasant surprise throughout.


In particular, the focus on developing Sienna into the final girl of the film, in some thoughtfully heroic manners, feeds well into creating a slasher heroine icon that’s damn near as narratively (and visually) impactful as Art the Clown is as a villain. Perhaps the “valkyrie” Halloween outfit she dons for the third act helps out a bit, but it’s a smart maneuver by Leone to capture the essence of the tonality he’s aiming for in the film.

Despite the strength of its villain and heroine (and her brother) in Terrifier 2, the biggest surprise does come from the new tonality of the picture. While the previously mentioned opening sequence reminds the audience about the first film’s motivation-less villain and brutality of its violence, it also adds in the first inkling of how things in this sequel will change. Art the Clown has an invisible friend. His new friend, credited as The Little Pale Girl, shows up in the first handful of sequences and brings in a more dream-like vibe to the rest of the film. 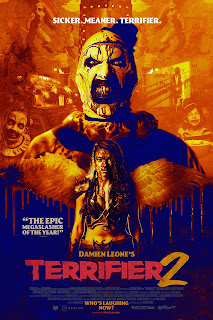 It’s this dream-like quality that takes the foundation of what Terrifier was playing with - think of a more brutal spin on the concepts of Halloween and pushes it fully into Nightmare on Elm Street territory. Punctuated by a very extensive (read: a bit too long) dream sequence where Sienna ends up in a commercial for a clown-themed food truck that ends in some delightful gore, the ethereal tone seeps further and further into the film so that its finale ends up feeling like a full-on nightmare, popping with carnival-inspired visuals that are only a half-step from some of the better dream sequences of the Elm Street saga with hints of giallo inspired moments.

When it is all boiled down, Terrifier 2 does deliver on what fans loved about the predecessor. Art the Clown is darkly comedic and brutal, the gore is impeccably well-crafted special effects that will make the most hardcore fan gag a bit, and the film grinds its teeth to the gums on the slasher tropes with vicious glee. What sets it aside and raises the stakes are the new focus on developing its protagonists, creating a much larger world for this universe to live in, and manipulating the tone to create a nightmarish narrative that bleeds over the black-and-white lines of its formula like a watercolor tapestry.

If you could not tell, Terrifier 2 ends up being one of the biggest shocks of the year and one of the most effective horror slasher sequels in the history of the genre. It’s bolder, bigger, and bloodier.

Stay for a mid-credits bonus that teases an even more mind-boggling expansion of this franchise - if we are so blessed to receive a Terrifier 3.