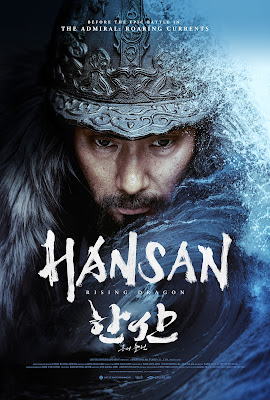 War of the Arrows with its blend of historical setting and marital arts action easily had me smitten. When he returned to that style with The Admiral: Roaring Currents, I was also relatively smitten. The style was epic, in both visuals and tone, and naval warfare at its center was as dynamic as Choi Min-sik was in in the titular role. Thus, when Kim Han-min decided to make another film in the same ilk as The Admiral with Hansan: Rising Dragon, it was hard not to get excited. The man has a knack for the genre and style.

Yet, throughout the experience of Hansan, I was never swept away in its wake. It fulfills all the necessary components laid out by his previous two films, but it is one that felt more formulaic and drab this time around.

Perhaps, it is the fact that by this time the style isn’t as thrilling as it was the first two times around. Hansan is hitting a lot of the same beats as The Admiral in both its style and narrative. The first half is, predictably, setting the stage for the massive sea battle of its second half. While that kind of structure is a tried-and-true narrative payoff, so much of the time spent with the characters – of which there are roughly two billion various generals, admirals, and other military names that pop up on screen, is meant to be building the tension of the military tactics more than the people involved in it.

There are some secondary plotting elements regarding the people involved, including some traditional ones like a teacher/student dynamic with the lead character and an elder general or some spy material that features a young woman who valiantly defies the baddies by rendering herself incapable of speaking, most of it felt increasingly trite. It is as if Hansan runs through all the fitting emotional elements for a historical war drama, but most of it is simply running through the motions. The performances carry most of the material through to make sure that it works, but the film is not nearly as interested in their characters arcs as how they serve the plot and, thus, it sorely lacks a presence like Choi Min-sik provided for The Admiral.


When the massive sea battle of its finale finally erupts though, it’s hard to deny just how effective Hansan was at setting up the action and how impressive it is to watch. It is built on the pacing of a traditional battle sequence, but the brutality of the shipwrecks and how Kim Han-min manages to imbue the emotion of death upon large inanimate objects cannot be understated. It’s a thrill a minute by the end, even with its massive amount of CGI, and it makes for one of the most engaging action set pieces in cinema this year.

Still, when it came down to it, Hansan: Rising Dragon felt like the least effective of Kim Han-min’s historical action films he has made thus far. It’s still impressively made, featuring stunning costume and production values that pop off the screen and performances that burn with subtle characterizations that help propel the focus of maritime warfare. It’s just that, of the three thus far, it feels the most like it’s moving through the motions rather than finding its flow.

Perhaps it is the kind of film that deserves a second glance before a final say, but for now Hansan gets a light recommendation for more casual fans. If you loved The Admiral though, it’s an easy recommendation to watch.