The Door That Wouldn't Shut: Something in the Dirt (2022) Review 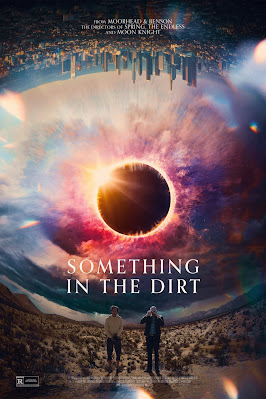 Trying to inherently review a film like Something in the Dirt is as complicated as the film is. On the surface, this should be easy. In actuality, it is a film so defined by its experiential aspects, nuanced moments, and viewer discernment. Trying to properly put it to words is… well, it’s problematic. Something in the Dirt is, like most everything touched by the directorial and writing duo Aaron Moorhead and Justin Benson, an existential trip of fascinating effect.

Powered by its ability to take a simple idea and shake it so vigorously in its own un-comfortability, it seeps into the little folds of its viewers’ brains. It’s the kind of indie cinema that blends genre elements with low-budget creativity to make one of the most absorbing film experiences of the year.

I also have no idea what the fuck happens in this film.

Something in the Dirt accomplishes this tightrope walk between confusing and enlightening (or nihilism depending on what side of the rope you eventually fall off on) by creating a narrative that embraces the artifice of the medium it's portrayed on.

What starts off as a film that looks like a traditional indie project, powered by the limitations of a pandemic shutdown and fittingly rough around the edges, is quickly revealed to be more akin to a documentary when talking heads pop up around the events of the film. Our two main protagonists, played by the previously mentioned dynamic duo Moorhead and Benson, are trying to capture footage of a strange physics-bending phenomenon in the apartment complex they are living in. As the film unspools, the layers around the artifice of the story being told to the audience only become more layered with more unreliable. Just like the characters and their experiences in the apartments - do we trust what we are seeing?

This question of the reliability of its narrators seeps into the characters themselves and their interactions with one another. They are not inherently friends prior to the events of the film and their only connection with one another, in the beginning, is the fact that they are neighbors, down on their luck, and seemingly find this phenomenon that may or may not provide a possible future. Their interactions, through two incredible performances from Moorhead and Benson, are punctuated by meandering banter between the two as they search for common ground and tell stories to highlight their pasts. How much of what they say is true is always called into question by one another and by the sheer artifice of the narrative, but it only feeds into the film's themes and style.


If one wanted to analyze the film for its themes around finding purpose, the dread of feeling like one is free falling through life - a motif of falling and/or gravity repeatedly pops up (pun intended), or how the idea around conspiracy and coincidence can push people to the edge, Something in the Dirt is chock full of it. Little details around their dialogue, in the visuals, and how small things feed into large ideas create a layered experience despite its more intimate scope. In these layers are where Moorhead and Benson play the most and by the time the finale rolls around there are far more questions than answers left drifting in the air.

All in all, Something in the Dirt might be reminiscent of their first film, Resolution, in its limitations and two-hander concept, but it’s one of their most daring films in the bold swings it takes with its nuances, themes, and powerful performances. To iterate on what I stated in the opening, the film is not going to play for everyone for all of the mentioned reasons. The narrative actively fucks with the audience and the film has no intention of answering any of the questions it raises.

Ultimately, it is a massive success for Moorhead and Benson, but it has to be said again…

…I’m still very unsure of what the fuck happens in this film.