After the opening voice-over narrative tells the audience that aliens are being imprisoned inside people’s brains, I started to question where Alienoid was heading as a story.

Scratch that. When the film jumped 600 years into the past, I really started to question what this film had in store for me.

Wait. Hold on. It was when the space SUV pummels through a sky portal to reveal a cyborg and his shape-changing Apple-style Wall-E knock-off sidekick who steal a baby from said past, rewire her brain, and raise her as a contributing member of the society in current times that I started to wonder… where in the fiery CGI-green-screen hell was this film going to go?

Granted, this massive South Korean blockbuster is playing in some fascinating fields as it goes - including the idea of combining Michael Bay/Roland Emmerich style science fiction blockbuster spectacle with period film Tsui Hark wuxia-inspired swordplay, but it is a lot. Alienoid is smashing two entire film’s worth of plot into a butt-numbing 140 minutes. Some of it works and some of it does not. Thus, leaving us a film that’s 80% spectacle in some shape or form with a lot of gobbledy gook for a plot underneath it. Alienoid is definitely going to develop a cult following almost immediately, huh?


Director and writer Choi Dong-hoon has earned this obvious blank-check project though. His record of delivering a varied slew of blockbusters is impressive (I adored his last two, The Thieves and Assassination) and most of his films feature that keen balance between plot, character, and spectacle in their respective genres. So, in a way, he’s earned the right to make this kind of wild card film. Take an even bigger swing, sir. I guess.

The main obstacle that Alienoid comes across is that it’s just too much. Too much plot. Too many characters. Too long. Too much CGI. Too. Too. Too. Had Choi resisted his urge for over-stimulation and decided to split the two main plots apart, both plots would have easily held up as films. 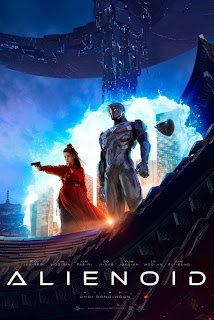 The plot about a cyborg dad, daughter, and floaty-botty sidekick fighting alien prison breaks and an attempt to kill Earth? Cute and entertaining.

The plot about a 1300s young mage who stumbles upon a plot by aliens to steal a magic knife while forming a friendship with a time-traveling young woman? Also incredibly cute and entertaining.

The problem is that, despite his best efforts to make the film feel like a mystery on both sides and how they interconnect, feels convoluted and muddy. It’s a mish-mash of styles, ideas, characters, and plot that just feels far more confusing than it needed to be as an epic. The non-linear narrative, which bounces between the two, similarly seems intriguing at first and then just becomes unwieldy as it goes.

It’s a shame too because Alienoid has some banging action set pieces and great characters to exist in this world. The performances range from hammy to intriguingly layered and heartfelt with Ryu Jun-yeol threading the needle so finely, he might have actually time-traveled straight out of an early 90s Tsui Hark supernatural wuxia. When the film is hitting the emotional heights and heartbeats of its characters, it showcases why Choi is so damned good as a director and the familial relationship of the modern set plot highlights it brilliantly. These are characters that are easy for an audience to connect with beyond their otherworldly adventures. It’s perhaps the biggest reason to see Alienoid.


Then, of course, the film does deliver on the spectacle - if you spell it in all capital letters. It’s got some fun, creative ideas at play here - including a city streets chase between spaceships, a superhero-inspired battle of borgs, and enough magic spells and flying swordplay to make Shaw Brothers proud. Although the significant amount of CGI certainly buries a lot of the action in unrealism, it is blockbuster spectacle of the highest degree with destruction and thrills aplenty. In a way, action fans will definitely find a lot to enjoy here.

In the end, Alienoid does deliver on its promises of outlandish science fiction action mixed with classic wuxia-style elements. For the audacity of that idea alone, this film is worth the watch. Yet, in the grander spectrum, Alienoid also lacks the nuance to make the visuals and story connect in a way that uplifts the entirety of the film. There are fantastic characters, great action, fun ideas, and some truly humorous moments that it delivers - but all of them feel disjointed from one another which undermines the entire experience.

Alienoid is a blast, but it is also a film that will obliterate its own strengths with its sheer shock and awe.