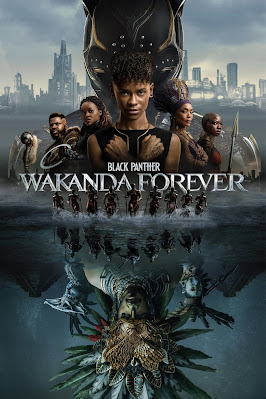 With a smoldering look in his eye and a defiant and yet somehow caring lilt to his voice, Tenoch Huerta Mejia’s Namor, the antagonist of Black Panther: Wakanda Forever, practically purrs when he’s speaking to Shuri, played by Letitia Wright. His presence is a massive burning sun in the film even as he sits having a heart-to-heart with the big hero. Yet, when he makes his big request to the Princess of Wakanda, he states it as a matter of fact. He asks her to burn the world with him.

You know what? Say no more, Namor. I’m with you. Burn this piece of shit planet to the ground.

Granted, his request in the film is far more loaded with contextual matter than his simple line of dialogue. This isn’t a young man passing a folded-up note to his crush in study hall. Or sending a text message. Or whatever kids do these days. Maybe TikTok. This is a man burdened with the knowledge and memories of a people driven to the sea by Spanish conquerors as they plundered his land for resources. And plundered his people as resources. Once again, Black Panther: Wakanda Forever proves that director and co-writer Ryan Coogler is far more interested in the gray areas of emotional and social commentary provided by the villains than the heroes in his Marvel movies.

This tactic makes Wakanda Forever one of the better Marvel movies in the entire slate. Similar to the antagonist of Black Panther, Namor is the star of this film. Tenoch’s immense presence, regal moments, nuanced emotional resonance, and pure will can be felt in almost any moment. It’s impressive, to say the least. For a film that surrenders most of its protagonists’ emotional threading to grief and loss, Namor aptly mirrors it and gives weight to the film’s loftier concepts around his forgotten people and how Wakanda needs to remember there were other races subjugated to the awful tyranny of colonialism.

It’s not that Coogler and his team forget about the various Wakandians that serve as the protagonists of the narrative, but he’s definitely using them to serve his thematic goals even more so than his plotting. Mostly because, as you probably guessed, the overall plot is very much in the Marvel formula. It’s a globe-trotting adventure for our new lead Shuri, still torn and distressed by the loss of her brother (Rest in power, Mr. Boseman), where she must hunt down a scientist, Riri, and then prepare for the upcoming battle against Namor and his legions of underwater warriors from the kingdom of Talokan.


In its Marvel way, the film is paced relatively well for its robust runtime of 160+ minutes with just enough action set pieces to break up the character and theme-driven narrative. Coogler still struggles a bit with getting the massive amount of CGI to fully integrate into the real world (most Marvel films do) but Wakanda Forever does it better than the previous Black Panther in making the action work. Whether it’s the fun chase sequence in the US, the final claws-to-fists one-on-one between Namor and the newly crowned titular superhero, or the (ultimately awkward) giant ass boat fight, all of the action is fun even when it’s too CGI-heavy. When it’s not nearly as CGI-focused, like the first fight with the royal guard - the Dora Milaje, the film feels more grounded and connected to its characters. This is inherently an issue with most blockbusters, superhero films included, so it’s to be fairly expected.

Still, despite its rather run-of-the-mill Marvel structure and safe action set pieces, Wakanda Forever manages to rise above the average and pull off a shockingly effective film. The choice to focus on Shuri as the new main lead is interesting, mostly because of the ensemble cast that is meant to drive the film I find Shuri to be one of the least interesting ones in the grander spectrum. Wakanda Forever does use Angela Bassett as an impeccable powerhouse to ground most of the film which is a much-needed presence since Lupita Nyong’o’s Nakia feels sidelined for a large swath.

Most of these characters are struggling with the recent passing of King T’Challa and the somber and sad tone permeates their arcs until the third act when Namor starts to bring out the action in the cast/narrative. Although it’s impossible to address this film and its choices, of which many had to be changed quickly after the real-life death of Chadwick Boseman (again, rest in power, sir), the film handles most of it admirably and threads it nicely into the larger themes about racism, colonialism, and ethnic conflict. 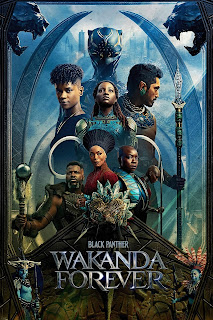 This brings this review, if it can be called that at this point, back to the shining gem of Wakanda Forever: Namor.

If I was being honest, my expectations of how Coogler and company would handle the ethnic conflict - in this case between Wakanda and Talokan - were low. It is not an easy subject to broach, let alone in a superhero film. Coogler, however, always seems to have his hand on the pulse of some mighty large ideas that both empower and critique the Black community while never detracting from the entertainment value of the film he’s making. In this case, he regularly prods and questions why Wakanda seemingly disengages and battles Namor and Talokan instead of recognizing how similar the two nations are - as people trampled by a history of colonialism.

Namor may be the “villain” of the film, but like Killmonger of Black Panther, he’s not inherently misguided with his responses. This is where Wakanda Forever manages to find its brilliance - not only does it use its themes to ask hard questions about the social status of Wakanda and its people and how they jeopardized themselves - but it brings light to the plights of the Indigenous peoples of Latin America through Talokan and how Wakanda has been isolated for so long - they forgot to build bridges to those who shared the same history and vision for the future.

Ultimately, while Black Panther: Wakanda Forever occasionally shows its cracks by forcing its ideas into the Marvel formula, the messages and characters embedded in the formula strike a fascinatingly strong nerve - in a great way. It’s still a fun movie with decent action and some great characters, but Coogler doubles down on the thematic weight and it makes Wakanda Forever one of the best that Marvel has released.