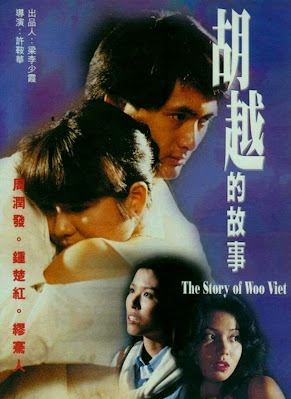 Story of Woo Viet is a powerfully told, albeit at times unbalanced feature by Hong Kong legend Ann Hui, featuring a subtle but searing performance by Chow Yun-fat, to whom the title Hong Kong legend most certainly applies to as well. This is the story of a Chinese-Vietnamese immigrant looking for a better life when entering Hong Kong, but of course, he and others around him are brought into a world of crime and suffering. Woo Viet will do whatever it takes for a better life. As he says, "Killing here is a lot easier than it was during the war!".

Ann Hui pulls together an impressive string of performances by Chow Yun-fat as the titular Woo Viet, Cora Miao as the soft-spoken and emotionally passionate Li Lap-Quan, and even Shaw Bros. badass Lo Lieh gets to brush up his dramatic chops here as Sarm, a co-worker who befriends Woo as they dive deeper into the life of contract killers. Cherie Cheung is fine here, but she doesn't have much to do as Shum Ching, Woo's love interest in the piece.

The film gets shockingly violent at times. Nothing in the way of gore or bloodshed, although it doesn't shy away from the blood itself, but rather the violence is realistic and the weight of it consequently is felt every time it is shown on screen. Chow Yun-fat goes in fists swinging and a lot of the impact is shown... clearly, the stunt team took a beating like no other. The violence depicted on-screen calls to mind the works of Ringo Lam. If you are familiar with his style, then you'll know exactly what you are in for here, although this film is much more scaled down, the intensity isn't.

All in all, I quite enjoyed the grim Story of Woo Viet and his tale of survival. I wish more time was given for Woo and the people he is around along the way to really blossom into something deeper and more meaningful, but as a socially charged man-on-the-run thriller, The Story of Woo Viet will definitely keep the audience invested from the start to finish. It's a film that doesn't quite reach the heights of the talent involved but makes for an impacting experience nonetheless.

Written By Josh Parmer
Posted by DarkReif at 12:20 PM