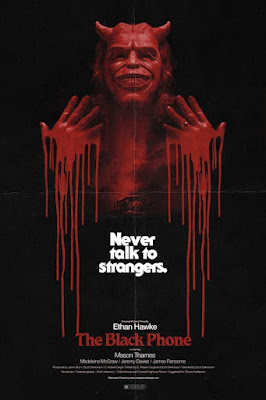 Walking into the theater, I had to double-check the ticket on my phone. My significant other looked at me and said, “This film is just over an hour and a half.” No way. I checked. She was right. It was a buck and 42 cents. Even though modern horror tends to pace itself faster than the cinematic bloat that has dominated the megaplexes for the last handful of years, there was a part of me that expected The Black Phone, the latest from director Scott Derrickson and Blumhouse, to be more akin to other kid-focused period horrors as of late. I.e. way too long for my enjoyment. Thanks, Stranger Things and the two It films.

Quite frankly, in its own way, The Black Phone represents the stylistic antithesis of the two previously mentioned slices of intellectual property. Both of those properties succeed in feeding the nostalgia while delivering their horror stories, but there is a sense that the nostalgia is weaponized. “Remember when we were heroes on bikes? Free to learn about life and fight our demons while making friends along the way?”

To an extent, those films had a gloss to them that shined the candy coating for easier consumption by the mass. There's nothing wrong with it, but it’s a very modern choice for movies that intend to ape their period for nostalgia rather than wrestle with it.

This is why The Black Phone is different. Yes, it technically hits many of the same ideas or themes about empowerment for kids to tackle their own horrors while learning valuable lessons, but Scott Derrickson (and co-writer C. Robert Cargill) are not nearly as content in caking the film in Spielbergian cinematic sheen. There’s a grounded and gritty element under the skin in this one that allows it to play more in the shadows, with complicated relationships, and opaque morals that those others may toy with but never grasp. And, instead of taking a whole day to tell it, The Black Phone does it in 102 minutes.

It certainly helps that, while it is an adaptation of the Joe Hill short story, the film has a lived-in and biographical element. Scott Derrickson has already stated that so much of its setting and characters are taken from his youth, growing up on the north side of Denver, Colorado (where this film is set) during the 1970s. It can be felt too. The kid actors portraying brother and sister Finney and Gwen are incredibly nuanced in their performances. The complicated relationship they have with their alcoholic and abusive father and the world they live in as latch-key kids avoiding bullies after school feels far more real than expected. Madeleine McGraw, as Gwen, absolutely steals this film as the tougher sister, spouting off obscenities and gritting her teeth through tears as defies the adults who always try to put her (or her brother) in their place.


The realism and dramatic setup are effective enough that when the Grabber, a masked and theatrical (not in an over-the-top manner) Ethan Hawke, makes his appearance towards the end of the first act, it feels disruptive, but completely in line with the world that has been built. The smoldering and seething evil that he brings to the performance, which not so subtlety sits under the surface of his lilted voice, has rightfully earned quite the praise already. It’s earned too. 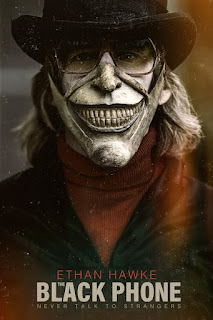 Of course, just having a serial killer nap a kid and have the kid break free could have worked as a film. The performances here and the 1970s aesthetic (in both setting and in visual style - beyond the film’s cinema reel style choice for the dream sequences) could have made this a dire and thrilling film on its own merits, but the film contains a supernatural bent that inherently pulls in the Joe Hill style into the narrative. Some telepathic elements, all told through the eyes of the kids, add another horror layer to the story. The race against time for Gwen to save her brother from clues in her dreams or how Finney sees the previously murdered kids in his prison as they walk him through their escape attempts add to the already solid writing in a way that emblazons the thematic layers about generational trauma while allowing Derrickson to inject his own brand of shock and sorrow imagery. Although the supernatural element is not actually the “scary” part of this film, it does give it an edge that cuts deeper when paired with the characters and messaging. Just the idea that when Finney never sees the ghostly kids when he answers the phone, but we do – is enough to write a full essay on.

Although it’s a bit early to call The Black Phone a bonafide classic, the film’s ability to navigate its period setting, its gritty ambiance, incredible performances, and traumatic plot make it one that lingers in the shadows of one’s thoughts long beyond its credits crawl. Horror fans have already embraced it in full, but it wouldn’t be shocking that once it hits digital if it finds alternative audiences that will appreciate it for its dramatic heft and clever use of setting and characters. For the time being though, it’s easy enough to recommend that viewers answer the call when The Black Phone rings. If anything, it won’t leave you hanging.

Written By Matt Reifschneider
Posted by DarkReif at 12:52 PM