Gonna Take More Than Killing Me to Kill Me: Doctor Strange in the Multiverse of Madness (2022) Review 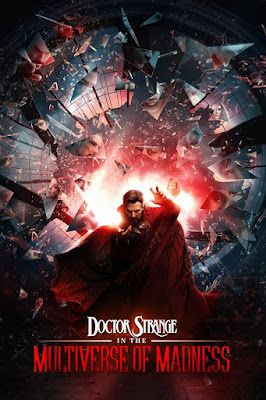 Although I am not the biggest fan of the first Doctor Strange, a Marvel Cinematic Universe (MCU) film that continually seems to garner and convert fans year after year, even I was hyped for its sequel, Doctor Strange in the Multiverse of Madness. The combination of director Sam Raimi at the helm and the fact that it was reportedly a direct continuation of the events from WandaVision (a show that easily ranks as one of the most fascinating and best uses of the MCU formula to retcon characters that were horrifically misused or underused in previous films), made this sequel a must see for me. Not that I would have skipped an MCU movie in theaters, but the stars seemed to align with this one. The question remained, how much would Disney and Marvel try to water down the film to get it to mix with general audiences?

Fortunately, for this reviewer, Doctor Strange in the Multiverse of Madness, which will just be referred to as Doctor Strange 2 from this point on - although I am tempted to call it 2 Strange 2 Multiverse for the sake of being ‘that guy’, is one that hits its mark. It’s not necessarily the best film for MCU fans, but it might be one of the more entertaining ones in the franchise and it delivers in some surprising ways that allow it to overcome its faults. Although the film requires some stretching and formula establishment to get moving, the latter moments of the film Doctor Strange 2 have so much energy and oddities under its cloak that it does find its voice.

Like so many of the modern MCU films, Doctor Strange 2 has a lot of plot going on underneath the spectacle of being a summer tentpole. It’s to be expected. It has ‘multiverse’ in the title. Yet, it becomes quite apparent from the get-go that this film isn’t as interested in exploring multiverses as it might have been. Although the fans seem to be shrugging with a “that’s it?” kind of reaction to the film, it’s the smart move. After it’s big CGI opening where an Alternative Strange, played once again by Cumberbatch who seems to be smugly settling in to the titular role, attempts to save a young woman, America, from a multiverse demonic monster, Doctor Strange 2 essentially becomes a chase film. It is a smart decision.

By structuring it down, leaning into its ‘save the young dimensional immigrant woman’ while running from the Big Bad of the film, Doctor Strange 2 can accomplish many of the storytelling tasks that it needs for it to work. Granted, the film struggles with its own formula in the first half. It feels as though it must get in a generic action sequence for our universe’s Strange (featuring an Angry Red Planet invisible creature that doesn't stay invisible nearly as long as it could have) and it tends to use America, played by a star punching Gomez, as a slightly fleshed out McGuffin, but once the film allows director Sam Raimi to harness the chaos it tends to find its creative voice and starts to use its strengths.


Yet, once the two characters are settled into their roles so does Doctor Strange 2. The performances are solid enough and Raimi is smart enough to continue to push Strange’s character away from being another Tony Stark/Iron Man clone, but the film toys with the idea that we are all good and bad people. It’s a theme, presented more aptly in the third act as characters meet better and more sinister versions of themselves, that does work. Does it occasionally get lost in the plunge of CGI madness? Could it have leaned more into their parallels as characters whose mistakes in the past cost lives, but they must continually push forward anyway? Sure, but it’s enough of a foundation that the rest of the film can settle a bit on it.

Now, I’m going to spoil a bit of the film here, so if you have not had a chance to experience all the verses of madness yet, feel free to skip forward to the next paragraph, but this point is important. As a semi-sequel to the WandaVision television show on Disney+, Doctor Strange 2 does make the bold choice to convert Wanda (who has fully embraced becoming the Scarlet Witch at the end of the show) into the villain of this film. While this does present an interesting moral quandary for its characters, particularly her desperate need to reunite with a family that never existed in this universe (a repetitive villain goal if you’ve had the chance to see the animated movie Spider-Man: Into the Spider-Verse), it does take one of the best characters of the entire MCU and break them down into a Terminator-like hunter. While Elizabeth Olsen does proceed to act the ever-living-shit out of the role (truly the MVP of Phase 4) and imbue it with some much pathos while still delivering on the horrific, slasher-like element of her quest, it does occasionally feel as though the film might have approached the character on a more nuanced level. 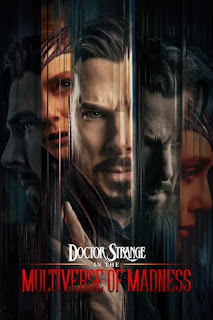 By the time that the film has settled into its groove and started the chase dynamic, Doctor Strange 2 is able to allow itself to embrace the one aspect that it has over any other film in the franchise: Sam Raimi. The second half of this film feels like a Sam Raimi film and his ability to blend genres - fantasy, horror, action, comedy, etc., enables a film that crackles with an energy that feels like an auteur director being allowed to play fully in the MCU formula. Whether it’s a Lovecraftian-style universe where two Stranges must battle with music made into corporeal weapons, a brutal slaughter against a separate universe’s most capable heroes (which allows Raimi to do his thing of being incredibly violent and horrific just in his visuals and editing without gore), or the somewhat nihilistic ending that caps off its themes about ‘right time, right place,’ Doctor Strange 2 ends up being quite the entertaining and punchy flick by the end.

Although Doctor Strange in the Multiverse of Madness probably doesn’t explore the multiverse in the many ways that fans thought it might, its strategic structuring as a chase film along with the themes around the past, mistakes, and the relentless marching of time allow the film to not get lost in its own concept. Although it does struggle with breaking the formula at first, by the time Sam Raimi is allowed to play with the characters, visuals, audio, and energy of the film - it starts to craft its own identity. It’s an identity that totally had me hooked and even though it still makes some odd decisions at times with its characters, Doctor Strange 2 ended up being one of my favorites of the MCU.