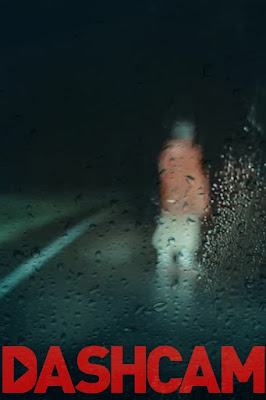 After taking the horror world by storm with his Zoom séance nightmare known as Host, director Rob Savage became an overnight sensation in the genre cinema world. If he could pull off that kind of effective horror filmmaking in 60+ minutes with minimal resources in the middle of a pandemic where all of the stars were quarantined, what could he do with more? It’s the question that often gets asked of stylistic and bold indie filmmakers and many of them flounder under the expectations of larger studio pressures or other external factors. The follow-up to a blank check guarantor is always exciting.

With his follow-up, Dashcam, Rob Savage partnered up with Blumhouse to dig back into the “found footage” end of the genre, and, quite frankly, it’s easy to see why he would. His technical prowess in delivering some shocking visuals and moments within the confines of the style is impressively bombastic with this film. If anything, Dashcam knows that it doesn’t want to deviate too far from the style that worked in Host, but it also wants to expand on it in some immense ways. The combination, while occasionally at odds with one another, provides one of the more fascinating horror experiences of the year.

When Annie Hardy (played by…Annie Hardy?) heads over to London to visit her friend Stretch after being in lockdown during the COVID-19 pandemic she finds that her abrasive and childish personality is at odds with the world around her. With a little internet fame for live streaming an improvised music show, she never puts down the camera. When she steals her friend’s car in a tantrum and picks up a frail old woman (Angela Enahoro) to take her across town, she unwittingly stumbles into a night filled with horror.

Like the comparisons to Host from above, one of the key aspects to Dashcam is that audiences should go into the film for the experience rather than the plot or characters. The introduction of its characters and the first half of character and plot development can be a bit of a chore to make it through. The film, in establishing a world where the characters exist, knows that for its finale to work it needs to establish a realism before launching into full horror mode. Granted, while the pandemic and its lead character Annie Hardy are technically real - including Annie’s Band Car streaming service outside of the film, there is a bit of a disconnect to make it work smoothly.

This disconnect is directly tied to the choices for its lead character - an extreme right-wing American woman who never hesitates to feed into Qanon propaganda with her abrasive, irritating, and offensive personality. This choice makes running through the plot a bit of a challenge. Not that every film should have likable protagonists, but this film challenges its viewers almost immediately to try and care for her.


Fortunately, her friend Stretch, played by Amar Chadha-Patel, serves as an audience surrogate when he pops up to ask the hard-hitting questions like “what the fuck are you doing?” and “what the fuck is going on right now?” Questions that are often echoed by the audience…in some great ways considering where the film goes for its latter half.

Although the film takes quite a bit of time setting up its story elements, it’s setting the stage for a second half that utterly pushes the limits of found footage in some surprisingly fun and outlandish ways. With its smaller budget, Dashcam still manages to bolster some impressive scare sequences with impressive effects and technical prowess that awes throughout many of its key moments which often run parallel to other great found footage horror like the cult segment from V/H/S/2 or how the film uses its point of view to deceive its audience ala the [REC] series.

Although to give too much away would spoil the fun of experiencing it, Savage and team are up for the challenge. You’ve never seen this many car wrecks in a found footage flick (or the horrific aftermath that keeps happening each time) and its use of Abigail as its antagonist often defies expectations and the smooth transitions for its effects - including a few incredibly effective jump scares and a handful of under-the-skin creepy moments. Once Dashcam starts moving, it’s an avalanche of handheld footage horror, picking up speed to devastate its audience and pummel its characters in a cascade of insanity.

While Dashcam may not have the efficient and minimalist horror brilliance of Savage’s first film, it’s a relatively fascinating beast unto itself. After its plodding first set up and challenging characters are established, it does effectively become one of the most effective horror films of the year and manages to impress and surprise in ways I did not expect to be hit with in a found footage horror experience. Dashcam might be wholly uneven, but its heights are insanely high and it has no problem with forcing its audience to experience them in full.