This Song Has Me Buggin': Macross Frontier: The False Songstress (2009) Review 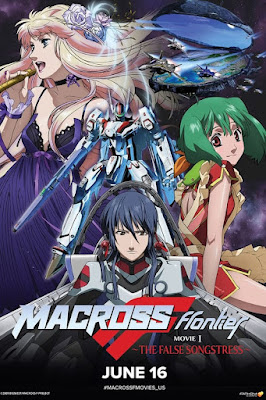 The entire release strategy for Macross and/or Robotech in the United States is a fascinating endeavor to unravel. Although that history is fairly well researched and written about in a variety of places by incredibly knowledgeable fans and cultural writers, it remains one of the cornerstones of understanding the relationship between Japan and the United States through the lens of anime. It’s complicated and the two industries often mistranslated the appeal of these kinds of shows. Yet, with anime now being one of the biggest industries in the world due to more avenues of access, the time is ripe to re-evaluate the relationship as the tides rise.

Although I am hardly an expert, only recently starting my journey through the anime landscape, the release of the Macross sequel series and its film, under the banner Macross Frontier, piqued my interest. Although the series and films had been obscure for western audiences since its debut in 2008 (with the final film dropping in 2011), the two films were finally getting theatrical releases in the US in 2022. For Macross fans in the US, what a time to be alive, right?

Yet, as I walked out with my family from seeing the first of the two films, Macross Frontier: The False Songstress (great title, might I add - considering the themes of music within the Macross series), a thought crossed my mind. Perhaps the release of Macross Frontier was influenced by the fact that this film is a messy barrage of self-praising referential moments, a combative combination of traditional animation and computer-generated material, roughly 200 thinly drawn themes, and main characters that waver between the traditional Macross love triangle and cringe worthy teen horniness. Compared to the other Macross films, which already have their highs and lows, The False Songstress is a wildly uneven and problematic ride.

As with so many popular anime shows that were converted into movies, the word on the internet street is that The False Songstress is a re-telling of the first 13 or so episodes from the series done in a remixed and rebuilt version for this film. It certainly feels this way. Not only are there a ton of characters that feel like they should be more important, but the film is disjointed in a way that smacks of a multi-tiered plot line that has been trimmed and jammed into a 2-hour experience that it wasn’t meant to fit into. Whether it’s underdeveloped conspiracy theories about two rival “planets” racing to find new resources, the entire private military SMS that serves as the defenders of the city, or a back story concerning “fold music” that draws an entire alien bug race across galaxies (?!), The False Songstress has A LOT going on and not nearly enough time to aptly dig into any of it in any meaningful way.

This issue then feeds into the characters. While the film retains the love triangle core idea that has been a Macross staple, the trio at the base of this film are also thinly drawn caricatures that feed into teen angst and a horny streak that’s three galaxies wide. Seriously, for a film that ultimately feels like a young adult coming of age story the number of immature moments for the characters might seem like fun on paper, but when it's added to what is supposed to be a romance set during a surprising conspiracy to start a war it feels wholly misguided. It undercuts the love triangle in tone and the film has no time to focus on it when it’s desperately vomiting plot and mopping it into the runtime. What’s left is a hollow heart to the proceedings that never reaches the heights of (in my opinion) the best of the series Macross Plus. With the high-water mark of romantic character plots like Dyson and Myung or Rick Hunter and Lisa Hayes, it was going to be a long shot to reach it, but it almost feels like instead of trying, they replace the character beats with childish humor and poorly executed coming of age angst.


That’s not to say that The False Songstress doesn’t have its merits. There are a handful of great moments and the first 30 minutes or so sets up the foundations of what could have been a fantastic feature film. The opening battle sequence, which has the mech fighters taking on one of the giant bugs in the streets of a city, is dynamic and fun and the initial conceit of the pop star coming to the “planet” bodes well for hitting all the themes of the series in a way that felt familiar but fresh.

Even as the film goes on, the plentiful pop songs and colorful visuals carry the film some distance, and the finale has its fair share of key action moments that snap. Although there’s not nearly enough action (it’s odd how the film opens and ends with some solid action and space battles, but there isn’t a key battle in the middle portion) when they do arrive it’s a nice change of pace from the struggling script and characters.

Ultimately, Macross Frontier: The False Songstress is just a mess. The high moments are intriguing, if not occasionally burdened by the pacing and mixed animation style that was popular when it was first produced, but there’s simply too much going on that the foundations built cannot hold the weight of the plotting and characters. And while this first film is just an adaption of the first portion of the series, it never finds its footing to stand on its own and it doesn’t quite have the tech and mech work to allow it to fly.