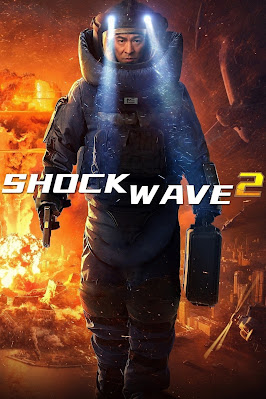 After the first Shock Wave blew me away (I apologize) with its blend of tension, thrills, and weirdly effective emotional weight, waiting for sequel, Shock Wave 2, to finally receive a release in the United States was a bit of torture, a burning fuse that just kept burning and never reaching its end (I apologize again). After being released in 2020 to some decent box office numbers and word of mouth in China, the lack of interest in releasing the internationally well-regarded sequel - with significant star power behind and in front of the camera - didn’t bode well for its quality. Was Shock Wave 2 just aftershocks to the big shock of its predecessor? I won’t apologize for that joke. Nope.

The opening sequence of Shock Wave 2, and I swear that this isn’t a spoiler for the film as a whole since this is the cold open, features Hong Kong airport being decimated in a nuclear explosion as people desperately scramble to getaway. Director and writer Herman Yau has no issue with establishing that this sequel will be bigger and bolder than its predecessor within the first ten minutes.

I am absolutely here for it.

The rest of the plot follows a more traditional Hong Kong crime caper narrative where a bomb squad police officer, played by the eternal burning youthfulness of the everlasting Andy Lau, loses his leg in a bomb trap set by terrorists. In the wake of this, he becomes embroiled with the terrorist bombers and finds himself straddling a line between his own anger towards the world and his innate sense of justice.

While the original film did intend to be more of a thriller than an action film, Shock Wave 2 intentionally swaps those intentions. Combining elements of the classic Hong Kong crime caper with a bit of modern spectacle to be added to the mix - particularly in its third act - this sequel might be sillier and more outlandish, but it’s a balance that works to be both entertaining and interesting with its themes.

Like the first film, there is a main plot component to its story that revolves around terrorists and a mystery to unravel for its characters that places them in the path of plenty of bombs - ones to be disarmed and ones to just evade. However, Shock Wave 2 injects even more classic action into the mix. One might not be able to tell that Andy Lau was pushing 60 when this film was filmed by the intense amount of chase sequences and hand-to-hand combat involved. Still, the film has a surprising amount of both and it’s all well executed and shot.


Despite a solid enough cast that includes Sean Lau, Ni Ni, and Philip Keung, Shock Wave 2 inherently rides on the screen presence and acting prowess of Andy Lau. Fortunately, that means the film is in very capable hands as he plays even the most far-fetched plot points, including but not limited to an entire second half where he suffers from amnesia, with the utmost of seriousness and emotional heft.  The sequences where he is coping with the recovery from his injuries or even his eventual fallout in anger with the bureaucracy of the police force are impressively crafted and his work as an actor carries the film through its tropes and its cracked foundations. Not that this is news to anyone, but making Andy Lau an anchor for a film can fix a lot of potential problems. It does here.

As Shock Wave 2 unravels, it does become increasingly outlandish and the suspension of disbelief it asks of its audiences can strain under the weight. The spectacle of its third act, which involves a train chase (as in a train chasing another train) and a ton of CGI explosions, can be tough to swallow. This doesn’t include the variety of flashbacks and shifts of the plot involving the terrorist group and our protagonist’s very convenient amnesia. It’s downright silly and laughable at times, but Herman Yau manipulates the pacing and expectations just enough that it builds to those moments with a surprising slickness.

On one hand, the emotional weight of characters and the steady hand of the original might make it a more traditionally effective film, but Shock Wave 2 is an explosive sequel that aims to be bigger and bolder in some impressive ways. It’s tonally more spectacle-driven with wilder plot lines, but Herman Yau and Andy Lau know how to balance those into the core themes making it one of the best action flicks of the year.