The recent number of Daiei films that Arrow Video has unleashed onto Blu Ray and digitally in the last couple of years, it should not be a shock that the Daimajin Trilogy was one of the next collectors sets. Although the three films were widely available on Blu Ray through a cheap release via Mill Creek already, after the previously released Gamera series was released, an upgrade was most welcome. Featuring the only three films of this fascinating tokusatsu series, The Daimajin Trilogy not only contains the HD versions of the films, but tons of new commentaries, discussions, and writings about the films in a deluxe collectors set. This review will cover all three films of the series, but if you are interested enough in Daimajin to be reading this article - you might as well order the set right now. It’s a worthy endeavor to see the unusual and all too enticing films included. 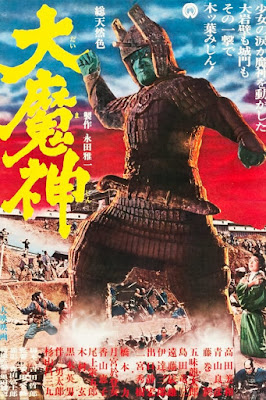 For those coming into these films fresh, perhaps riding on the wave of kaiju resurgence that has been occurring as of late, Daimajin might be a surprising film. While the giant stone mountain god of the title is prominently featured in the artwork and marketing, the ‘monster’ aspect of the film is relegated to the third act mostly. The approach to this film is more akin to a feudal Japanese samurai film than the classic kaiju one. The first two acts feature a story about a coup that occurs against the local government that puts a vicious new ‘warlord’ in place who crushes the innocent people under his oppressive regime. The children of the previous ruler are sent to live in hiding on the mountain of the daimajin (or mountain god) and when shit hits the fan 10 years later, prayers and an attempt to crush the statue on the mountain awaken the sleeping giant to wreak havoc on the corrupt and vicious usurper.

What works so splendidly with Daimajin is the choice to not have the giant statue awaken until the third act. There is a sense that it will happen, even if you have not seen the marketing, through a religious figure and a foreboding sense of fate crafted in its script and direction. The focus on the characters own struggles to survive and thrive under the new regime embed the film with a humanity and hope that drives the narrative well, laying the groundwork to root for the vengeful daimajin when he does arrive to crush buildings, step on baddies, and general bring destruction. The dual strengths of incredibly well shot visuals that bound between the lush forests of the mountain and the barren rock laden area where slave labor was used to build a new gate and the special effects make Daimajin a visual feast to consume. It’s tonality is realistically grounded which makes the fantastical elements feel bolder and more awe-inspiring, made palpable by how the characters respond to those events.

Although the film is substantially different from other giant monster movies of the time, perhaps more akin to a period episode of Ultra Q than Godzilla and it’s subsequent knock offs, the strength of its writing and execution visually make it a must-see classic of the era worthy of this latest release. 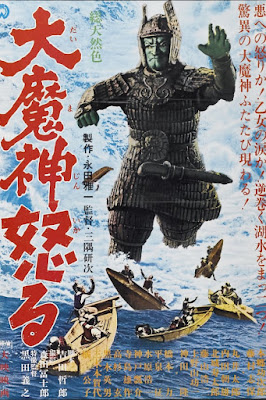 Reviewing the Daimajin films, particularly all three in a row as is the case for this piece, is certainly a unique experience. For those readers out there that have seen the films, you’ll already know why. At the basics, the three films are essentially the same formula and - almost the same narrative story. As is the case for 1960s Japanese cinema, if a film hit its audiences, it was replicated to varying degrees of success. However, it becomes very apparent with this first sequel, Return of Daimajin, that the screenwriters were just picking a new locale, a handful of stock characters, and then swapping out moments.

Return of Daimajin is still the best of the trilogy. For all the replication of elements from the first film in a slightly new manner, where the coup d’état and evil usurper of the first is replaced by an outside invader, for example, it’s through the direction of iconic director Misumi where this film finds its stride.

The new setting, which features a lakeside village under attack from a mountain warlord who wants to reap the benefits of living by the water, is maximized by the director visually speaking. In particular, the island in the middle of the lake that houses the stone god kaiju, is built through both visual and practical effects in a way that makes it both daunting, intimate, and still fantastical. When the titular titan makes his appearance in the third act (to a very impressive reveal, might I add) it’s Misumi just feeding the audience some wild imagery that tops its predecessor.

The human element is slightly more fine-tuned and even smaller side characters, an old man who takes care of the island stands out as a prime example, just pop from the formulaic script. Misumi was always able to snag layered performances from his cast and Return of Daimajin is no different. The characters might be rather stock, but the performances and how the film paces and balances the human strife with the building tension to the kaiju third act make it easily a surprisingly dense watch for something so engrained to replicating the first. 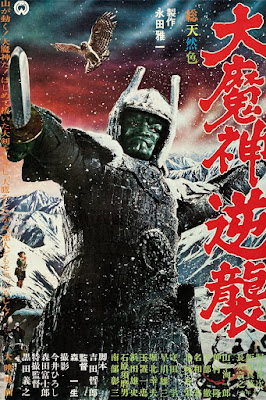 ...and with this last film, the trilogy of Daimajin ends - that is until someone gets the bright idea to release a Shin-Daimajin film (please, someone do that). Unfortunately, after hitting a high point with the second film, this third entry, The Wrath of Daimajin, starts a relatively quick slide back down. As with the previous films, Wrath follows a fairly strict structural pattern by introducing its human characters, focusing on a struggle between the oppressed and the oppressor, and then having an instance of violence or tragedy that results in our big stone god coming to life and throwing down with plenty of sets and miniatures. At its core, it’s more of the same and fans of the series will immediately feel comfortable in strapping for the predetermined narrative ride.

That being said, whereas the first two films very much replicate the same script basics in the human element, this film attempts a slightly different approach to its material. By different I mean it follows suit with the rest of the kaiju genre of the period. Wrath shifts the main focus from adult characters to child ones. Instead of the plight of a village or family, it’s a band of four young boys traversing Daimajin’s mountain and this change of pace is a welcome one. The inherent problem is that the secondary plot, focusing on some slave labor and oppressors is not nearly as enticing as the intimacy of the boys’ plot - which has them crossing paths with a few villains and one of the greatest mustache’s to ever grace a face. There is a sense of adventure in the main plot (and a surprisingly darker tone) that makes this one stand out from the rest, even if the acting and child wigs feel a bit imperfect.

Action wise, it’s more of the same in the third act where the stone god trashes some buildings and steps on a few people to retain the balance of peace and it lacks some of the visual pizzazz of either of the first two films. Although the snowy mountain element of the third act is visually interesting, director Kazuo Mori doesn’t quite hit it out of the park with as much finesse as the rest of the series. Compared to some of his other classics, it’s not quite as effective in the layering. Side note: everyone should watch his film A Certain Killer. It’s an instant classic, horrifically overlooked.

With these three films though, it’s hard not to recommend the interesting angle that the Daimajin trilogy brings to the genre. For those more familiar with the classic Godzilla and friends tropes, these flicks will add an interesting layer - a more dramatic human element with its time period struggles that adheres more to classic chanbara cinema. The restorations are crisp and beautiful, showcasing the fantastical practical effects, sets, and costumes in all their 1960s glory and the special features are what any tokusatsu film fan will want to dig into - new appreciations for the films, visual essays, interviews, and enough commentaries to shake a stick at. Just the odd discrepancies that exist through the three very similar films, all directed by fantastic directors in their own right, make watching all three in a row a wild ride. Even though there is a cheaper Blu Ray set that already exists, with the new packaging, features, and booklet, Arrow Video’s Daimajin Trilogy set is worthy of any collection.

Written By Matt Reifschneider
Posted by DarkReif at 4:21 PM