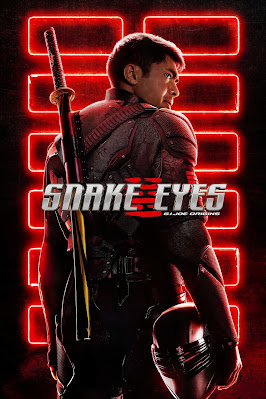 The G.I. Joe franchise has always walked (and punched) down a fine line. If it’s too serious, it loses the summer blockbuster casual fans looking for escapism. If it’s too goofy? Fans of the intellectual property will cry parody and abandon ship. It’s the same debate that happened with Rise of Cobra and Retaliation and it’s already a debate raging online about the latest, a pseudo-reboot of the Hasbro toy line as action cinema, Snake Eyes: G.I. Joe Origins. For a film that’s meant to be a silly modern interpretation of an 80s iconic character born of the ninja boom of that era, that’s a lot of pressure.

With an $88 million budget in tow, not including marketing for the film, and an increasingly apathetic audience to the IP, Snake Eyes has an increasing amount of grapple-hook-wall scaling to accomplish. Yet, it’s a pleasant surprise to know that this reboot, directed by Robert Schwentke, is weirdly effective at finding a balance in the basics. It lays its stakes firmly in the world of silly, bombastic summer blockbusters, but in doing so it also manages to lean into the lunacy of the G.I. Joe world. It delivers something slightly different than the usual expectations of world policing in Go America Joe or the Marvel Cinematic Universe appeasement which benefits the experience.

The origin story, blatantly labeled in the subtitle of the film to prevent people from confusing this film with Brian De Palma’s Nicolas Cage starring effort I guess, is changed from the source material and it’s for the better. The story focuses on the unnamed Snake Eyes, played by hunka hunka Henry Golding, as he attempts to find the man who killed his father when he was a boy. His trajectory partners him up with Tommy Arashikage, played with smoldering intensity and subtle charm in a film stealing performance by Andrew Koji, and their blood brotherhood takes them back to the Arashikage clan in Japan to do battle with an evil yakuza leader.

Snake Eyes doesn’t sound like much of a G.I. Joe film and could have stemmed from the formulaic ninkyo eiga (chivalrous yakuza films from Japan in the 1950s and 60s) instead. This is definitely where the film surprises in its more interesting aspects. Considering the film is written by the person who gave us such cringe-worthy classics like The Unholy, 2019’s Charlie’s Angels reboot, and Dwayne Johnson’s Hercules, this was a big surprise. Partner that fact up with a director that also gave us a lot of flat and unmemorable blockbusters like R.I.P.D, Red, and two Divergent films, then definitely consider it a bigger surprise considering how sharp the designs and production values are for the film.

The focus of the film on Snake Eyes and Tommy’s relationship with the development of its many side characters in the clan is a strong choice for the film. It’s surrounded by a lot of unnecessary fluff, including a ham-fisted way of jamming it into the G.I. Joe universe with the inclusion of Baroness (Corbero) and Scarlett (Weaving) in an underdeveloped secondary plot as they arrive to play in the third act, but the core of the film is much stronger than expected and carries it through the silliness. Snake Eyes is more in line with the classic Asian martial arts action cinema of the past, but it’s wrapped in a lot of spectacle, conspiracies, and silliness to satiate its blockbuster standing which occasionally detracts from its strengths.


Yet, despite its surprising core durability in concept, Snake Eyes stumbles where it truly needed to soar: the action. The choreography and development of the numerous action set pieces are stunningly good. That’s the brilliance of hiring Kenji Tanigaki to craft all of the fight work. That man has delivered some of the most truly inspired and creative action of the decade, working with Donnie Yen numerous times on films like Special ID and Enter the Fat Dragon, but it’s his work on the Rurouni Kenshin live-action films that show cases just how truly brilliant he is. This just makes the stylistic choice of using handheld “shaky cam” to shoot the fight scenes and then frantic editing in these moments so baffling. Most of its cast know how to work a fight scene, the film features Andrew Koji and Iko Uwais just to name a couple, and yet the action sequences are incredulously indescribable in the moment. The fantastic choreography is there, it’s just buried underneath Bourne style visual bullshit.

Snake Eyes: G.I Joe Origins is a much more dynamic film than critics or fans will give it credit for, particularly in its impressive casting, gorgeous production designs, and classic martial arts inspired core story. The fact that the writers and Schwentke attempt to move away from a more traditional superhero (Rise of Cobra) or Delta Force (Retaliation) approach to the material and tried to combine ninkyo eiga, martial arts, and 80s Cannon ninja fodder in the likes of American Ninja as its inspirations are commendable and interesting. Its misfires happen in trying to force in too much connection to the other G.I. Joe characters and a perplexing approach to filming the action that betrays those influences.

Still, for a film that has to overcome a lot of apathy from audiences and reignite a failing IP, Snake Eyes is better than expected and a fun, bombastic flick bound to be a cult staple in ten years. Dare I say it, it’s a more respectable film in its bolder swings than the half-assed espionage in Black Widow - even if the misses are more blatant.