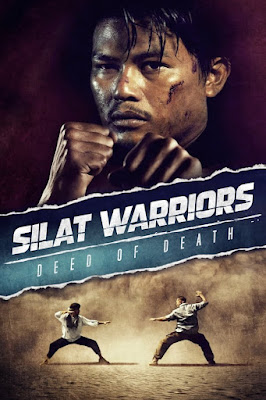 In recent years, there has been an intriguing boom of DIY martial arts films that have shown the strength and talents of their filmmakers. Not just The Raid either. Films like The Paper Tigers, Die Fighting, or Unlucky Stars have gloriously allowed artists inspired by classic kung fu cinema to strut their stuff. The films are often flawed, perhaps burdened by lacking budget, but the heart and soul - usually partnered with a creativity in the fight choreography - easily make them worth watching. Part of this wave includes the low budget ass kickery of Silat Warriors: Deed of Death (originally titled Geran). This Malaysian modern martial arts flick absolutely understands its limitations and often uses them to its benefit, focusing on the grounded realism of its fights and character interactions to fuel its intensity rather than spectacle or effects. It’s a throwback to the gritty action films of martial arts past in all of the best ways and delivers on intimate character work and two fists worth of tight action sequences.

There is a simplicity to Silat Warriors that drives home its messages and focuses. It tells the story of a small family that’s thrown into the world of loan sharks and gamblers by their wild son, who has run up a mountain of debt in the city. As the enforcers and gangsters start to come after him, his family gets involved and while they defend themselves against the sins of the son, his brother must head to the city to find his brother. This is not a complex story.

Director Areel Abu Bakar never intends to embed the film in anything other than a gritty realistic tone. Even when the film adds in unique elements to the classic martial arts formula, some racing sequences for the wayward son to participate in for example, the film still feels grounded in a realism that is often forsaken for spectacle in modern action cinema. Visually, it’s a bit desaturated to give it an earthy look and substantially gritty in its use of contrast and ‘rough around the edges’ cinematography. It partners well to parallel the atmosphere that juxtaposes urban and rural settings or the night and day sequences. For a low budget film, there are some strong choices in tonality and visuals that give the film a refreshing feel against all the brightness and CGI influenced pops in visuals that dominate modern martial arts films.

The tonality embraces the classic martial arts concepts that create the foundation for Silat Warriors. Deed of Death is cut from the basics of the genre - family, forgiveness, loyalty, and justice against oppressors on the hard-working lower class people. The film navigates through most of the members of the family, one that just happens to be trained rigorously in martial arts for self-defense, and it doubles down on those layered moments between the members to tell their story without substantial flashbacks or exposition. Some of the performances can be a bit hit or miss and when the humor shows up, mostly through the best friend character in that classic goofy sidekick role, it’s silly and slapstick that doesn’t quite balance with the rest. This is where Silat Warriors tends to struggle the most in finding its pacing and tightening up the writing to tell its story, but it is not a huge obstacle that it can’t ultimately overcome.


Naturally, I made our readers wait for multiple paragraphs before addressing the big question mark that most fans will ask in going into a low budget martial arts actioner - what about the fights? Well, this is where Silat Warriors soars. In an attempt to match the darker tones and gritty narrative about a family struggling against an invading group of thugs and gangsters, the action is as hard hitting and vicious as one would hope. It features a ton of the classic Hong Kong style that has influenced so much of the world, but it leans away from the stunt spectacle and embraces the hard-hitting nature of people using fits and feet against other people to survive. The stunt work and choreography are fast paced, well shot, and visceral and by the time that the older son leaves home to go to the city to find lost brother, the action has already reached a special fever pitch and the final act is sheer martial arts mayhem, brought down to a trench warfare style endurance challenge.

Silat Warriors: Deed of Death is destined to be a fan-favorite gem of the genre. It’s not without its flaws in its rough DIY approach to filmmaking and loose script that attempts to weave between family drama and classic martial arts rib cracking, but the strong choices by the director, the strong core performances from the family members, and the impressively technical and well executed action sequences make for a film that action fans simply need to see.

Written By Matt Reifschneider
Posted by DarkReif at 9:57 AM