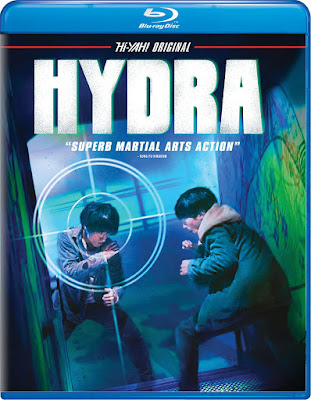 Just a few months ago, word about a fantastic low budget martial arts thriller started to pop up in the social media circles that I frequent. Hydra had the potential to be the next big thing in terms of its star and director was what the dredges of the internet churned out. When Well Go USA picked up the film for distribution, to be available via their streaming service Hi Yah first before receiving a Blu Ray and DVD release, it seemed to verify the rumors. However, for fans of martial arts films - even low budget DIY ones like the previously reviewed Silat Warriors, temper the expectations. Hydra is a fascinatingly artistic take on the usual tropes of the action and martial arts genre and it’s one that intentionally defies some tropes while actively grasping onto others with a death grip. The combination proves to be infinitely intriguing, but not one that may appeal to all fans of the genre.

Judging this film by its script or its narrative can be problematic. Mainly, that is due to Hydra adhering to the classic action formulas of characters and plot with flawed intensity. The story revolves around an ex-assassin turned chef, played with effective nuance by Mimoto, who works as a small sushi bar to protect the daughter of his old mentor. When his old friends come calling, he will have to take on another elite assassin before his newfound chosen family become unwilling pawns in the game. Sound familiar? There are only a couple hundred films with the same characters and plot. This is where Hydra struggles the most, attempting to hurdle the basics in a way that sets it aside from its peers.

It’s not without its charms and bold choices in execution though. Director Kensuke Sonomura makes some odd and bold decisions with his approach to the action cinema blueprint. Some of it works, like the synth heavy score and the manner that the urban streets at night juxtapose the warmth and intimacy of the sushi bar, but other portions are baffling. The film’s characters are muddled in its vague and rushed exposition and portions of the secondary cast feel as though they are in a different film than its lead and villains.


The strangest part of Hydra is how long it waits to finally reveal its brilliant action. For a film that is marketed for its strength in martial arts and directed by a famous action director/martial arts choreographer, the first real action set piece doesn’t arrive until almost the hour mark. To note, the film is only 77 minutes long. There are hints to the action that will arrive, particularly in how the lead handles himself and the establishment of the world of spies/assassins, but the film languishes in its mystery thriller elements of the first two acts. It’s just too slow in getting to the best aspect of the film.

When that action hits though, hot damn, it hits like a semi-truck blowing through a mall. The action is all hand to hand or knife combat, but the intricacy and speed of its intimate material arts throwdowns is mind-blowing. It’s realistic, brutal, and impeccably choreographed. There are essentially only two fights in Hydra, but both are contenders for action sequence of the year, delivering cold, calculated man-made destruction in human sized packages.

Hydra ends up as a fascinating exercise in artistic choice than it does being the stunning action thriller it was touted as in the word of mouth. Some of those choices work, including the atmospheric urban touches, the score, and the lead performances, but it’s heavy reliance on formulaic scripting and mishandled characters and narrative make it a curiosity watch. However, the final act and the incredible fight work almost make the rest worth the watch. If Hydra is meant to kick off a larger assassin universe, then I hope that Sonomura and company grab some bigger budgets and increase the sense of urgency in the pacing, because the established foundations are solid. It’s just finding a better balance to make more Hyrda work.