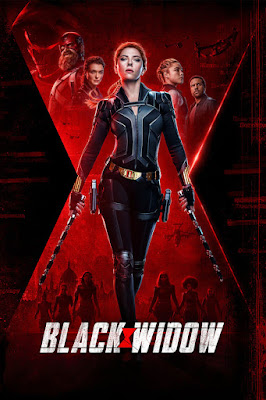 Over ten years and dozens of films later, the MCU (Marvel Cinematic Universe) has finally unleashed its Black Widow film, un-enticingly titled Black Widow, for the masses. Scarlett Johansson’s Natasha Romanoff, the titular Black Widow, was introduced back in Iron Man 2 (only the second film in the MCU for those counting) and fans have been clamoring for her solo film since. Yet, time and time again Marvel/Disney has negated the fans and stumbled over their excuses of why they couldn’t crack the film. Most of which sounded like tripe. However, the scientists and algorithms have finally done it and the film is now out in theaters, it’s thrilling fans, and it’s raking in the cash in the box office and over on Disney+.

It’s too bad that Disney and Marvel seem intent on continually following the same patterns with the character because, once again, Black Widow is a mishandled “could have been great” experience. One where the character takes a back seat to her own story and Feige and company are terrified to deviate too far from the established formula to have anything unique to say about anything related to the character.

After the events of Captain America: Civil War, Natasha (Johannson) is now a rogue agent and looks to find haven off of the grid. When a mysterious package arrives from her sister, Yelena (Pugh), Natasha is thrown back into her past as a Black Widow trained in The Red Room. To destroy her past, free her sister, and move forward with her life, she will have to get the old “family” back together, including the two spies that posed as her parents (Weisz and Harbour), to find the The Red Room and free the Black Widows from a new chemical mind-control.

The individual Marvel “solo” films work best when they take a new approach to storytelling that separates them from the more traditional superhero films. When Black Widow was announced and trailers indicated a heavy lean into the espionage approach - not unlike modern classics from the franchises of Bourne or Mission: Impossible, it felt correct. It’s a fantastic approach that should have made Black Widow refreshing in tone. The opening of the film is proof. A throwback sequence to Natasha and Yelena as children as their parents, played with the right amount of tension by Harbour and Weisz, nails that The Americans vibe and sets up the film for an old school approach.

Perhaps it shouldn’t be surprising that the film then almost completely abandons the approach after the credits roll and leaps right back into the Marvel formula with a full grin. The basis might be more espionage-esque, but it lacks the true sense of paranoia or claustrophobia. The lacking questions about ‘who can be trusted’ and the tension that goes with it are fully ignored and, since the film exists as a prequel, there is no real sense of consequence to the events occurring. By the time the second act rolls around, it has fully adhered to the Marvel/Avengers formula, complete with globetrotting sets, quippy dialogue, macguffins, and plenty of sky explosions. Part of me wonders if Marvel has a plot and narrative algorithm that just randomly spits out things. It’s at its most apparent here.


The mixed quality doesn’t stop there either. Black Widow has plenty of ideas that could work, but the entirety of the experience is so dedicated to ‘Not Messing It Up’ that it plays it incredibly safe to dig into the more interesting elements. The entire concept that the family, a falsehood of their initial mission where kidnapped kids and Russian agents are cobbled together, is revealed as the closest thing to a real family that any of them ever had. It’s provocative and the performances from the series newcomers steal the show when the film digs into those ideas. Weisz, Harbour, and Pugh inject a new life in the formula and there is a subtlety beneath the performances that rings true. The problem remains that it’s all wrapped in that Marvel Quip and quick pacing that the characters don’t get to just exist in those moments. When they do it’s pure. It’s just too fleeting.

Black Widow can’t spend too much time in those character moments because it has to get to the next action sequence. Far be it for me to criticize a pop pacing and I will never dock a film for having too much action. For the most part, the action sizzles in Black Widow and it delivers plenty of fun and entertaining sequences. The first one-on-one battle between Natasha and Taskmaster on the bridge highlights the film. It’s the one time that the film leans into the choice that Taskmaster can replicate Avenger fighting styles in a stylish way. The finale feels a bit muddled in balancing the various action set pieces all happening at once, but it mostly works. If the villains were a bit more memorable, particularly the ‘puppet master’ behind The Red Room, it would have helped, but nonetheless it entertains well enough and delivers where expected.

Black Widow is fine. Marvel delivers the usual fare here with enough action, quippy dialogue, and interesting characters that exist in the world to satiate (if not fully excite) the fans of the long running series. The additional new characters highlight the film, setting up either a new Black Widow film or, the more likely option, another Disney+ series. It’s just such a disappointment that in her own film, Natasha - and thus Johansson, feels like she takes a back seat to the formula and characters meant to replace her. To top it off, the film is so utterly safe with so many of its choices, it lacks the true makings of an espionage film or final farewell to the character.

Aren’t you glad, people? Marvel finally gave us the Black Widow movie that lives up to their treatment of the character throughout the series. Middling overall. With a kung fu movie on the way in Shang-Chi and whatever the hell The Eternals is, Black Widow doesn’t really feel like the kickoff that Phase Four needed for Marvel. If anything, it’s a movie that goes through the motions to deliver the long-awaited promise in a relatively half-assed manner.

Written By Matt Reifschneider
Posted by DarkReif at 2:49 PM