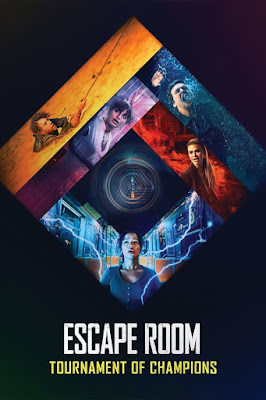 It feels like yesterday that Escape Room was released in theaters; a new series that was very intentionally meant to be the heir apparent now that the Saw franchise sealed the final nails in the coffin after Jigsaw. My, how things have changed? Not only did the Saw franchise not die with a whimper after the 8th installment (it promptly went into hibernation to emerge from its cocoon to just whimper and die this year anyway) but delays and a pandemic kicked its sequel back almost 3 years. Nonetheless, if you happen to remember Escape Room, then its long-awaited sequel, Escape Room: Tournament of Champions, is going to be exactly in your wheelhouse. Not only is it a direct sequel that references a ton of material from the original, for the franchise whores out there, but it’s a film that knows exactly why people will want to see it: ridiculous trap rooms slathered in gimmicks surrounded by questionable and illogical conspiracies.

If there’s any film to comment on the emotions of a pandemic surviving movie going audience, it’s the feeling of being trapped in a confined small space meant to kill you, surrounded by questionable people who may or may not be trying to make sure you don’t survive the ordeal. Hello, America 2021. I’d like you to meet your new friend, Escape Room 2.

All jokes aside, Escape Room: Tournament of Champions embraces the silliness of its premise with a renewed energy and it’s stupidly entertaining for it. Running even shorter than the first, this latest entry reintroduces our two protagonists from the first film, Zoey and Ben (Russell and Miller, respectively) and a slew of other individuals that beat the Minos Escape Room horrors. Lured to the middle of New York, the deviously evil corporation out to out-puzzle people, readily throws them back into the next series of rooms. Will they survive again or is there more than meets the eye this time around?

On one hand, Tournament of Champions is - in essence - more of the same. It’s the same two main protagonists, it’s gimmickier (lovely) rooms of death, and more outlandish conspiracies on the Umbrella Minos corporation that uses human tragedy for gambling sport. The rooms are once again the highlight of the film, although I am not sure any will top the “upside down billiard hall” of the first film, and the intensity of visual punch that director Adam Robitel shoots the sequences is a blast. A train car filled with electricity arcing from wall to wall? An entire room filled with quicksand that eats entire buildings? Acid rain blasted fake New York streets? Laser filled banks? Hell yes, absolutely. When Tournament of Champions is cooking, it’s big flames and the sheer visual and tension of the film remains as entertaining as it was the first time around.


The bigger issue that undercuts the film from being as strong as its predecessor is that Escape Room: Tournament of Champions doesn’t have the strength of characters this time around. The continued story of Zoey is still an interesting one, brought back around by a few handedly fun plot reveals in the latter half, but the new characters are stock examples of modern horror tropes. Half of them don’t even get enough screen time to develop a relationship with the others or are simply forgotten as the film focuses down on doubling up the pacing and conspiracies behind the entire ordeal. The lacking build for them makes most of the traps, despite being fun and exciting, feel like the consequences are a bit lacking.

The new elements to the film are thrown in the direction of building out the universe and expanding the reach of the evil corporation. Most of these are thrown in during the third act and since the film is so focused on unraveling mysteries, it shouldn’t be that shocking it would pursue that avenue. It does result in Escape Room: Tournament of Champions feeling like the middle portion of a trilogy, particularly with how the film ends. The film stands on its own as an entertaining piece of silly genre work, but the approach sets up a bolder and more unique third film than this one and teases it with a giant wink.

For those who enjoyed Escape Room, this second effort does feel like it’s a slight scoot backwards, mostly due to the obvious slaughter fodder of secondary characters, but it balances the strength of its gimmicks and strong direction from Robitel with just enough new material and universe expansion to be another highly enjoyable romp at the movies. For those that never bought into the gimmicks, Escape Room: Tournament of Champions is still a difficult sell. The combination of strong visuals, tight tension, and creative kill designs make it worth it though. Now let’s hope it does well enough to warrant that Escape Room 3: Wheel of Fortune Torture so that the trilogy can be complete.