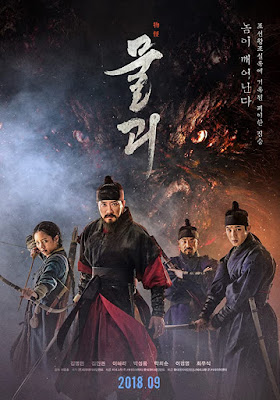 Premiering as a Shudder original, Monstrum was a film that arrived in SK in 2018 and the fact that it took so long to arrive in the US is blasphemy. It’s a blissfully odd and charming film that combines a variety of genres in conjunction to provide a film that works as a historical semi-wuxia inspired action film, a political thriller, and a giant monster horror flick. It’s ambitious to attempt throwing all of these styles into one blender than hitting frappe, but Monstrum pulls it off and does it with an immense sense of balance. Whether it’s through the familial tone of our main family, lead by an ex-captain of the guards, the strange backstory that’s revealed for the monster, or the intense sword clashing battles that results from the political coup as the backbone of the main plot, this film delivers on it all and quickly bounces between them as the narrative goes on. Following our main family as the King recruits them to hunt down the plague-carrying titular monster, the film leapfrogs between the styles with a relative quickness that works to keep the audience hooked into whatever is currently happening. It’s a balancing act between plot and narrative that strikes a fine line that emphasizes the talents on display.

As with many films that try to bend the space-time genre continuum, it takes a steady hand from director Jong-ho Huh and the execution has to be on point for the balance to work. Visually speaking, the film is stylish, leaping from being gory monster attack set pieces to a “one-take” sword fight meant to replicate the style of the “one take” action set piece in the first Kingsman film, and it’s obvious that Huh has his hand firmly on the wheel at all times. Even when the film struggles, some of the humor can be a bit flat at times and the romantic subplot is a bit thin, but Monstrum is covering so much ground and is so charming in doing so that most of those issues feel minor in comparison.

Between the crisp visual style, the impeccable use of period piece sets and costumes, a cast that is game for all of the genres its hitting, and an enigmatically pieced together plot, Monstrum is a huge surprise for the year and a bona fide gem to discover on Shudder. The action is truly exciting and the horror spurts with enough gore and tension to appease both fans, but the film gets recommended beyond those groups too. It’s an oddity, but South Korea has certainly brought another cult classic to North America.