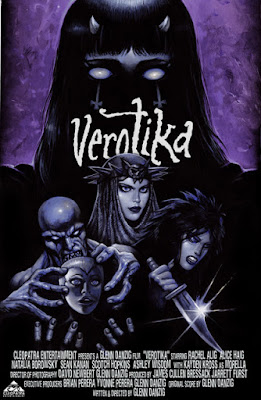 Verotika stumbles lazily into the first vignette involving a woman with a strange physical deformity and an eight-armed monstrous serial killer that they call “The Neck Breaker”. I will try to summarize that again, but the details will only make that more confusing. Dajette is a model who has significant trouble in her love life because her breasts have eyeballs instead of nipples. After a sexual encounter sours due to her abnormality, Dajette starts crying, tears falling from her boob-eyes. A tear lands on an albino spider, and it transforms into a large multi-armed monster man who’s addicted to breaking the necks of prostitutes and is only active when Dajette sleeps. See, it feels like I’m rushing the synopsis again, but I’m not. That’s a fairly accurate and literally beat by beat description. Eventually Dajette can’t live with the guilt anymore and kills herself as the police catch up with The Neck Breaker, ending his reign of terror.

So, the problems for this segment only begin with the plot, non-sensical as it is, but it doesn’t have anywhere near the effects budget to make any of this look even slightly realistic. I’m a fan of cheap, cheesy horror, but everything in this movie looks like it was bought at a Halloween store… and the clearance part at that. The heart breaker here is that of all the stories presented in this anthology, this is the only one that has an idea. Not one that is capitalized in any way, but the idea of a serial killer that’s only active when you’re asleep… that taps into some of the same kind of fear that a good werewolf movie does. There is potential in the concept, though I’m not even sure the film makers were aware of what they had with that beat as it’s completely squandered. All of that vitriol, and the real kicker? This is, by far, the best and most functional part of Verotika.

Now the film rolls into the “story” of the face stealer. A woman walks in an alley, another woman appears and announces that she’s going to cut the first woman’s face off. The first woman says “Please, don’t cut off my face” to no avail, and then there’s a five-minute dance at a strip club. This basic pattern repeats several times, and that’s your second segment. No motives, no characters, no real conflict. The mystery woman doesn’t even wear the faces over her face… she just skins them and collects them. This really stands as a perfect example of why people comparing Verotika to The Room doesn’t really ring true for me. They are both functionally inept passion projects from creators with no grasp on the film making process, but where The Room is absolutely a comedy of errors whose fun is found in its ineptitude, it’s also constantly fascinating. It throws everything at the wall, and doesn’t even pay attention to what sticks or not. It is the work of people who really wanted to make a successful dramatic film. Verotika is the work of an established entertainer who wants to shock and titillate you. Much like a porno, the stories presented here are secondary, even tertiary thoughts.

The third sequence is a take on the story of Elizabeth Bathory, a countess who bathes in the blood of virgins. One of the virgins escapes. She’s hunted down and the countess bathes in her blood. This screenplay completely runs out of steam at this point. And that really is the sum total of what happens in this sequence. Nothing in the run time of this film ever makes sense as a narrative, and it’s directed and edited, in a strange way that forces actors to just vamp for minutes at a time with nothing else going on. I would legitimately guess more than half of the runtime of this film is just actors mugging for the camera with no apparent direction.

What this all feels like is a heavy metal music video without the heavy metal music or the hard runtime cap. With some re-editing to thrash metal, any given segment could pass for pretty fun in that context. This movie is also a pretty good example of why “pure shock” doesn’t actually work. Hostel makes you have feelings about its characters, whether positive or negative, before mutilating them. You have an investment in these people’s fates. Verotika at no point even makes the effort to establish anything, and as such it ends up as a dull, lifeless ride.