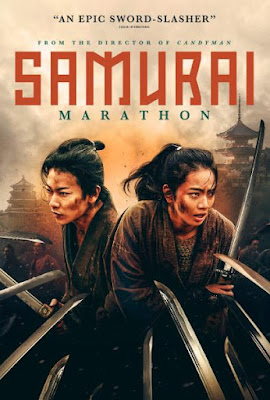 However, my second watch with proper expectations in tow was a more impressive experience. Set within a relatively realistic historical time period, namely 1855 and telling the story of the first ‘samurai marathon,’ this film attempts to blend a variety of different plots and genres into one film. It takes a bit of political intrigue, punches it with a bit of 1800s espionage, and then surrounds that in the tale of a small village that starts a marathon of the various ‘samurai’ in town. Samurai Marathon is not the action film that some of its marketing would indicate, but it’s a culmination of a variety of styles which, while not nearly as thrilling as one would hope, makes for a fascinating film.

Starting with its espionage film, it quickly establishes more of an ensemble approach to its narrative, bouncing between a spy, a princess on the run, and a small family from the local village – while hitting a variety of characters in-between. Director Rose handles it with an incredibly steady hand, finessing the narrative and plot into place with a sense of realism and humanity, but not shying away from the more genre leaning elements of its third act when needed. He’s supported by an incredible cast, notable in many ways but headlined by Takeru Satoh, that deliver on much of the emotional material that’s embedded in the character-driven plots. A bombastic score livens up the naturalistic landscape and realistic style of the film, making it one of the more remarkable things in a film that plays things in a grounded manner. Even when the film starts to add some action and more gimmicky characters, including a villain with two pistols that steals entire sequences in the film, Rose plays it with a seriousness that never betrays its historical setting and somehow manages to navigate the pitfalls of balancing the two.

For fans of gimmicky or genre heavy chanbara films, Samurai Marathon might be a bit slow and heavy on the traditional historical drama to truly entertain to the levels expected. With the right expectations though, the film does pay off in dividends with its genre-blending exercise in delivering multiple story elements in a cohesive and often quite emotionally effective package. Samurai Marathon is an impressively swaying slice of historical drama with just enough of a modern twist to set it aside from its current peers. It takes a bit of time to develop and its concept might seem awkward at first, but it’s a film that benefits from multiple viewings to tease out the layers.