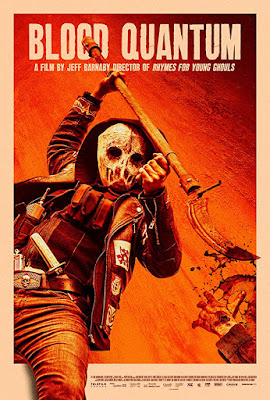 Quite frankly, it’s the initial set up of Blood Quantum that works best. As the zombie apocalypse arises, shown brilliantly in the calm of the morning as a fisher is gutting his catch of the day and starts to see his fish start to flop around in defiance to their deathly state, the film settles on a Native American community trying to cope with its own everyday problems. Problems are laid out impressively through familial squabbles that bring to life some intriguing characters and dynamics with just enough social commentary to breathe a lot of life into the premise. Some solid performances and fantastic direction make this opening act a gut-wrenching and effective set up that delivers on artistry, horror, and thoughtful writing. Very rarely has a zombie film been set up this impressively.

From that point, the film then leaps forward in time and presents us with the characters living in a post-zombie apocalyptic compound. The execution of the film carries over, thanks to some impeccably crafted visual atmosphere and more strong performances, but the narrative struggles to find anything as fresh as the first act to say. There is plenty for the zombie fan to love, creative kills, some tense ‘search and destroy’ missions, and plenty of the usual villainous humans that fuck it all up, but it’s reliance on more currently popular zombie tropes in storytelling undercut its potential. The strength of its direction and cast certainly make it a worthy watch, but it does deflate as it goes through to the end.

Blood Quantum delivers on its overall promises. It’s a film that, while still giving the undead horde their taste of zombie movie flesh manages to inject a freshness to the stale genre. A strong ensemble cast, some impressive atmospheric and visual direction from Jeff Barnaby, and great practical zombie effects will definitely put this at the top of the best zombie films of the last 20 years. Sure, the film panders a bit to the current state of zombie affairs with its latter two acts, often becoming predictable in nature, but the film carries a tasty bite with it – which reminds me of the days before the fatigue when a zombie film could get me truly excited.