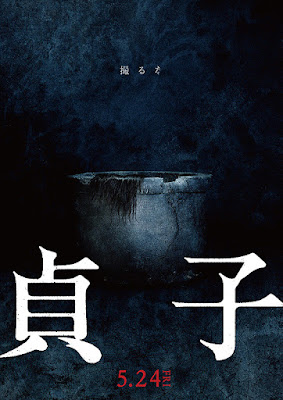 For this entry, a mysterious young girl (Himeka Himejima) locked away in a closest, finds her way to a hospital after a devastating fire sets her free and kills her mother (Rie Tomosaka). The young doctor there (Elaiza Ikeda) suspects something odd with the girl. When her brother (Hiroya Shimizu), a rising YouTube star, challenges himself to visit the burned-out apartment where the young girl was found disappears, all roads seem to lead to the possibility that the vicious ghost Sadako is attempting a resurrection.

Sadako, as a villain, is certainly more of a puppeteering force than in previous films, bridging two narrative threads together. On one hand, you have a slightly modernized look at how Sadako tampers with technology – where a “new video” of her curse is embedded in Kazuma’s YouTube video. On the other hand, the film once again toys with the idea of Sadako trying to use a young psychic girl to free herself. Neither are new to the franchise (Sadako 3D is about the internet and Ring 2 (and Ring Two) both deal with kid possession to some extent) and Sadako never adds anything really interesting to the mix. There are some intriguing threads here and there, including some changed back story to Sadako and an element about children left and ‘forgotten’ by their parents, but nothing feels emotionally connected to the main plot or explored in any meaningful way. It’s there, but it’s an echo to the film’s mainstream intentions.

On the surface, Sadako seems more concerned with just delivering another round of creepy suspense and ghostly terrors. It does deliver on those tropes, with one TV sequence in the second act that fans will enjoy and another trip to a sea cavern that is meant to replicate many of the previous well sequences. Nakata oddly shoots the film, making it feel like a TV movie at times with its off-putting contrast and brightly lit elements, which betrays the analog inspired atmosphere of his previous entries, and it doesn’t work nearly as well. Even the scares are rather mundane as it goes through motions and the lack of new elements make for a rather forgettable experience. The performances are decent enough, particularly from Elaiza Ikeda who is tasked with carrying the weight of the film, but even those seem remarkably safe for such a crazy franchise.

All in all, Sadako represents an interesting idea about taking the series back to its roots and establishing a few new concepts to a cinematic universe that is quite well known. The problem is that it’s too safe. All of its ideas are brushed aside for a mainstream spook and destroy tale. It lacks the bold atmosphere of the original run and never adds enough flair or flavor of its own modernity to warrant its existence. It has some solid moments, in particular, the opening scene is quite fascinating, but the dual narrative never allows it to dig deeper than the surface level. Even when this franchise was at its worst, it was at least swinging for the stands. Sadako doesn’t even try that.