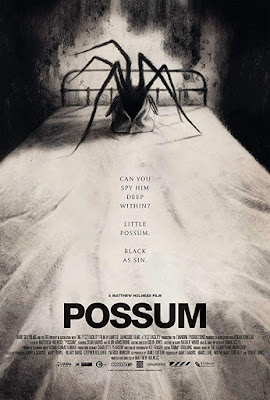 Director Matthew Holness makes his feature film debut in this darkly gripping story about trauma, mental illness, and freaking terrifying puppets. Prior to Possum, he had written and directed many pieces for TV, but this film seems like a stark departure from what one would generally consider “tv” type entertainment. One can only hope that we see more of his work in the future, as anyone who watches Possum, will attest that it is a novel approach to storytelling, regardless of their preference for the subject matter.

The cast is lead by Sean Harris (Mission Impossible: Rogue Nation, Mission Impossible: Fallout) in an immensely intimate performance. Exploring the overlap between our monsters and ourselves is nothing new, but the vulnerability and dysfunction that Harris lends to this role is visceral and breathtaking at his best, though at times becoming almost too surreal to border on pedantic. Alun Armstrong (Penny Dreadful, Sleepy Hollow) is as dynamic as his lead man and plays an ever-changing foil brilliantly as adoptive uncle to Harris in a quiet English town.

The score provided by The Radiophonic workshop is truly harrowing. Utilizing dissonance and atonal sounds, it creates a tension that permeates the entire film. The editing (Tommy Boulding) and cinematography (Kit Fraser, Under the Shadow) of Possum are what truly makes it stand out in the increasingly crowded field of UK based indie horror. With aesthetic and tones borrowed from The Babadook while simultaneously utilizing the same non-sequitur cutaway techniques from Raw, visual storytelling is what makes this piece worth watching.

As amazing as the final payoff may be, it does feel like an exercise in patience to finally get to the grand reveal, without much indication that there will be such a thing throughout the film. The intensely atmospheric storytelling relies heavily on its unease without creating much of a plot, though a story does solidify towards the end.

It is difficult to dive into what makes this film worthy of praise without revealing the secrets at its core. Suffice it to say that if you can hold out until the end, it will be worth your time.
Fans of experimental, atmospheric, or surrealistic horror will find a welcome friend in Possum. Those who demand a bit more show or narrative probably won’t enjoy this film.

I for one can’t wait to see what Holness does next.