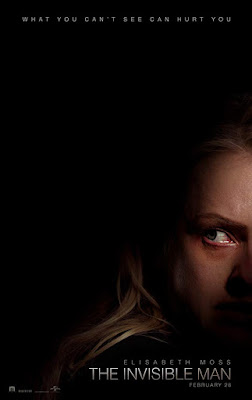 The film starts with immediate tension. Against the aural backdrop of waves crashing on a beach, we see Elizabeth Moss’ Cecelia sneaking out of bed, and the scene mercilessly ratchets tension up as every move she makes is slow and careful and quiet. She has a bag packed and she is sneaking through an absolute compound of a home even scaling an eight-foot wall. It’s truly the most effective exposition I’ve seen in a film in years. Cecelia sneaks past a wall of PhDs, has bottles of birth control and muscle relaxers hidden, even apologizes to the dog for not bringing it along, all in astonishing service to telling us all we need to know about the dynamics of the relationship between her and Adrian Griffin (Haunting Of Hill House’s Oliver Jackson-Cohen). She is terrified by him and we learn it all in a show don’t tell fashion. This also deeply emphasizes a theme in the movie, domestic violence, in an interesting way. We don’t have a sequence where we see Adrian hit Cecelia. They barely share the screen for more than a minute in the entire first act of the film, and this creates a situation where we have to believe Cecelia strictly at her word. It is her word against his, and I think that that is refreshingly challenging. By the actions we see her take, we have little doubt Adrian is every bit the monster she portrays him to be, but it is still, technically, asking you to take her word for it.

And then Adrian apparently kills himself, leaving a substantial amount of money to Cecelia. She’s doubtful, thinking that this is a trick to make her expose herself, but tries to get on with her life. Then weird things begin to happen all around her and Cecelia is convinced that Adrian is alive and somehow invisibly stalking her. This brings the “he said she said” aspect set up on the theming and successfully makes it horror. False messages sent from her phone, a kitchen fire that she’s blamed for, she starts blaming her dead boyfriend and her friends and family begin to think she’s crazy and obsessed. A different kind of movie would make this the central mystery, a “is she crazy” kind of situation, but The Invisible Man is a good old-fashioned horror movie through and through, and above all else this movie is scary. It starts really cleverly, after the suicide when Cecelia is celebrating her fiscal windfall with her friends, and the camera cuts to a tilted angle, a voyeuristic view from down the hall that makes it immediately apparent that he’s watching. Whannell brings back his Upgrade cinematographer Steven Duscio, and again they make dynamic visual magic together. After that shot, however, we rarely know when the titular invisible being is at any given time, and it’s legitimately terrifying.

This film also ratchets its tension in an expert way, using sound, visuals, and frankly excellent acting all around, to make a movie that’s not dependent on jump scares with a monster archetype nearly built on them. There are actually very few jump scares in the whole film, and your mileage may vary, but I was nailed by all of them. The effects work is top-notch and the deaths in the film are all reasonably memorable. The movie’s action is well-staged and very exciting, though it’s definitely a bit on the gory side. Not a complaint for me, and certainly even not up to Whannell’s own Saw levels, but the violence that’s there is fast and realistic.

Every once and a while you see a movie and you know that there is some part of the cinema landscape that is changed by the impact. I honestly feel like this movie is one of those. There have been a lot of effective social commentary horror stories recently, and there have been a few deeply haunting films, but in this era where the only respected horror is the so-called “elevated” variety, it’s earnestly refreshing to see a broad, mass appeal, classic capital “H” horror film that is this successful at telling its narrative. The only negative I could see for someone is if they’re expecting a more direct interpretation of the classic HG Wells story, but frankly? That’s me digging for something. This stands as a pretty solid modernization of the story at a concept level and refocusing it on a female character, playing on the fear of being stalked by an unseen force is a stroke of genius.

I could not suggest this movie any more highly, and I think this one is destined to be an actual classic.