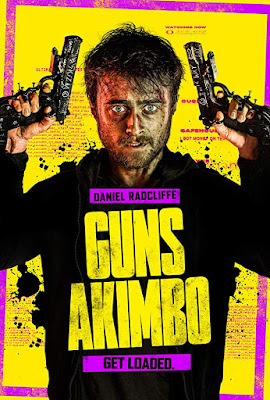 Daniel Radcliffe plays Miles, a proud counter-troll. He spends all of his time on the internet reporting people on Facebook and truly feeling satisfaction in his chosen work. One day he dives into the chat room for Skizm, an online combat stream. Skizm is not particularly different from similar programs in similar exploitation films like the battle royale from Battle Royale, or more on point, the race from Death Race 2000. It’s a modern gladiatorial fight to the death and there are less than no rules. It’s current champion is Nix, played by the always electric Samara Weaving (continuing her bid to be the best part of every genre film she’s in, which is frankly rapidly becoming a not insignificant percentage of them), a psychopath who’s violent cruelty is matched only by her wicked creativity. Back to the point, Miles delves into the chat room for Skizm and tells everyone there that they’re bad people and should feel bad. The next morning, he wakes to the goons behind it all busting into his apartment, knocking him out. This time regaining consciousness and finding, as I indicated earlier, guns literally bolted to both of his hands with fifty rounds each and no way to reload. He also gets a text saying in no uncertain terms that he’s now a contestant and his first opponent is Nix.

And that’s basically it. The entire plot is mechanically designed to get from action scene to action scene as efficiently and humorously as possible. That’s not a bad thing, as the action scenes in question are exciting and funny, well shot and gory. This is also a deeply morally repugnant film. Even Miles’ basic moral compass completely dissolves by the end with Radcliffe going from terrified of his plight to steely-eyed killer at the seeming flip of a switch. Nix brings a certain post-modern nihilism to the film that Samara Weaving plays exceptionally well, and even the police presence in this movie exists solely to give Miles something else to worry about. The two main detectives in the story seem to be Skizm fans, interested only in arresting Nix to an unprofessional degree. It’s worth briefly mentioning all of the acting in this film is on point, from the villainous Richtor (played with surprisingly hilarious humanity by Ned Dennehey) to a wonderful homeless mentor character portrayed by Flight Of The Concords’ Rhys Darby.

I love how recklessly irresponsible this movie is. It’s apathetic, nihilistic and cruel, it’s not asking you to think or consider the world’s issues. It’s asking how does one open a door, use a phone, or pee when your hands are ostensibly taken from you.

In the interest of objective critique, this movie is nowhere in the neighborhood of flawless. The acting is good, but the dialogue is largely awkward at best. Occasionally funny, and many of the one-off lines are solid, but the actual dialogue? It barely exists and what’s there is mostly expository. It’s also shot like Neveldine/Taylor and Michael Bay had an exceptionally hyperactive baby that they gave a camera and gimbal, and it is deeply style over substance. That’s not a bad thing for me, but I could see it causing headaches for someone less accustomed to experimental and frantic action.

Guns Akimbo is a fun little shot of adrenaline in an otherwise lackluster genre year so far.