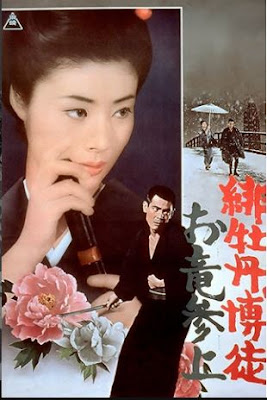 Intriguingly enough, Oryu’s Return works as a direct sequel to Red Peony Gambler 3: Flower Cards Game. Maybe not all that surprising since it’s the same director, Tai Kato. The young blind girl from that film, a strong subplot for our titular lead Oryu, returns as the main driving point for this one. Oryu, played as expected with finesse and power by Junko Fuji, has spent some time looking for the young lady who is now of marrying age. She stumbles across her as a petty thief, soon to be punished for her crimes. This results in Oryu getting entangled in a yakuza turf war around a local theater troupe. Swords will be drawn, gambling will be performed, and – as with all of the other entries, Tomisaburo Wakayama will show up for some action-comedy hijinks in a one-off scene.

The film starts off in the usual manner, having our wandering heroine drop into the rising tensions between two yakuza groups. It takes its time setting up the romantic subplot of the young woman and her suitor, as it does with establishing the hierarchy of the two groups, and adds in one more subplot featuring an always welcome Bunta Sugawara as the “nothing left to lose” wanderer that always pops up in this series. Initially, Oryu’s Return feels loose and the plotting of the theater troupe seems surface level at best to give the film a slightly unique setting compared to its peers. It only briefly refers to the previous film in introducing the young woman and it’s not necessary to see the previous one to be able to enjoy this. While the film is certainly well directed with Kato delivering some fantastic visuals and the performances being in tune with the atmosphere, the script at this point can be thin. Oryu doesn’t get much of a character arc and even the romantic subplot of the two secondary characters feels a tad rushed. The formula is strong in this one and Oryu’s Return doubles down on those caricatures for it.

Fortunately, as mentioned in the introduction of this review, Oryu’s Return has such a potent and powerful third act that most of the stuttering moments of the first two work. All of the seemingly odd point plots come together, including a scene where an actress is rejected for a new woman in the upcoming play, and the usual Oryu whipping out the knife and gun action set-piece gets brutal. The film shifts into pitch-black tonal territory by killing off key characters and the final act has our two heroes fighting their way up a towering house in the blue-hued dead of night where only the bright spurts of 70s colored blood break the color scheme. Director Kato handily soars in this third act, using weather like snow and rain to add some visual dynamics and tone shifts for the feel of the film, and the final action set piece is beautiful in its design and brutal key moments. Seeing Junko Fuji and Bunta Sugawara team up for some old school yakuza butchery is blissful.

All in all, Red Peony Gambler 6: Oryu’s Return is both a surprise and formulaic entry into the series. It lacks the character depth to Oryu and narrative that it needed – particularly with it bringing back the blind girl from the third film, but some incredible direction from Tai Kato and a riveting third act make this one a decent watch. Not the sharpest of the series, but an entertaining one nonetheless.

Written By Matt Reifschneider
Posted by DarkReif at 10:18 AM