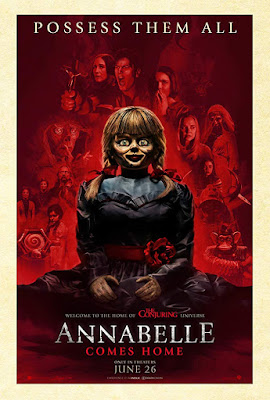 Annabelle Comes Home is a fascinating occurrence. The Conjuring franchise is only two films long and it has inspired five theatrically released spin-offs. The latest is the third of its own franchise and the focus of this review. How many theatrically released films can make that claim? There are many franchises where the spin-off series has more entries than the originator, but most of those are relegated to direct to home video with the Scorpion King/Mummy series being the first to come to mind. Here we are with the latest Conjuring-verse film and while none of the spin-offs have held a candle to the roaring fire of horror quality that is the main films, Annabelle Comes Home, weirdly, might be the best. That’s not saying a whole lot, honestly. Although I am quite the fan of most of the films, the quality of the spin-offs has been middling at best with mediocre scripts uplifted by solid directorial choices. Oddly enough it was the last Annabelle film, Annabelle Creation, that was my favorite of the spin-offs and after seeing Annabelle Comes Home with a packed audience, this one just might top it. Barely.

To say that Annabelle Comes Home is the best of this evil doll series comes as a surprise even to me. There is a lot of love for the first film (not from me) and the second film had an incredibly talented director that raised it above its parts. The marketing for this film was fine, but the over-reliance on bringing the evil doll back from two prequels and having the film center around the daughter of Ed and Lorraine (the two leads from The Conjuring films who also show up to bookend the film) made it feel like it was reaching. This is not the case though. In fact, the approach to making it Conjuring-lite adds a lot of heart to the film and even sets up the franchise for multiple possible futures. It’s a smart move and it’s a solid reminder why the Warrens, as characters, spawned so many films even if their last film is now 3 years old. There’s a lot of heart and soul in what they bring to the screen in a balance to the horror and Annabelle Comes Home benefits from it.

Along with its intention to bring Annabelle back into the current timeline (well, current for the series anyway) it’s also a film that takes a rather intriguing approach to its content. The last few spin-off films, specifically The Nun and The Curse of La Llorona, have approached their material with a distinct intention to hit a niche audience within the horror community while still maintaining the overall James Wan inspired approach to things. Whereas the previous two films tend to be wildly hit or miss in executing those intents, Annabelle Comes Home does a pretty damn good job at balancing the two. On the one hand, it’s a Conjuring style film with lots of gimmicky ghosts and ghouls, plenty of long takes, great use of lighting, and a sound mix that loves to pull out and let the silence hang in the air. This is not all that surprising as director Gary Dauberman was a writer on all three Annabelle films and The Nun (not to mention both chapters of It) and he knows what works in the series for audiences.

The other part is that the style of the film is akin to a teen girl slumber party horror film. Yes, you read that correctly. When your lead characters in the film are all young teens/tweens with three female leads who have to survive the night when an evil doll awakens the demons in the house, then there is a tone and audience that is going to relate to that best. Between the character beats of potential boyfriends, the stress of how parents reflect on kids, and lessons about learning to fend for yourself or finding the true friends that stand by you, there is a sense that this film is going back to family friendly roots for its themes and layers. Weirdly enough, it works. The humor is silly and well done in conjunction with the jump scares or impending dread while the characters are played with a sense of charm and relatability. They still make plenty of eye-rolling choices in the name of plot progression and, as mentioned, the bookends with Ed and Lorraine do feel a bit tacked on, but it’s not like anyone goes looking for a great script in an Annabelle film. The fact that it’s cohesive and somewhat memorable already puts it a step ahead of many of The Conjuring spin-offs.

However, perhaps one of the more interesting elements of the film is how much it feels like a fishing game. While Annabelle is presented as the most dangerous demonic force in the Warren’s closet of evil knick-knacks, she only comes into play occasionally for the scares and nothing major until the finale. The rest of the film is made up of various other ghosts and monsters that she empowers. This is where the fishing comes in. Annabelle Comes Home loves to cast a lot of lines of various stories and monsters for the audience. Which one will the audience latch onto first for the next spin-off? We have deadly bridal gowns, coin dropping soul takers, a mist created werewolf-ish hellhound (?), and a variety of other things like a future predicting TV and a haunted board game. The film plays around with each in some fun ways, there is a sequence with the bride walking around a room that is incredibly well shot and fun, but it never gets to embrace them had there only been one or two. It makes for a hodgepodge of great scares, leaning the film in some ways towards a Poltergeist angle.

Overall, Annabelle Comes Home is still a relatively mixed bag thanks to some unfinished threads or a script that tries to jam a bit too many scares and monsters into its relatively brief run time, but the new focus on the daughter and her babysitters along with some fun humor and some great gimmicks made it an enjoyable time for one of The Conjuring-verse spin-offs. Its script is still better than any of the other side stories and strong sense of contained fun and style make it a great summer horror flick.

Onward to The Conjuring 3.