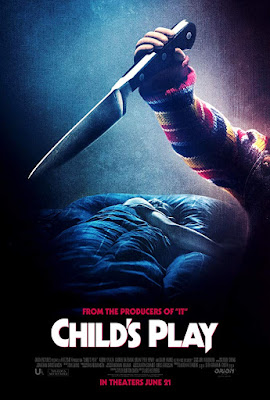 Honestly, the Child’s Play series has always been a favorite of mine. The original terrified me as a kid and growing up with the series through its ups and downs has been a pleasure to follow. When it hits its lows (Child’s Play 3) it bottoms out, but the series has always somehow found a way to reinvent itself in bold and intriguing ways. Enough so that Mancini’s last two entries, Curse and Cult of Chucky respectively, have been two of the best of the franchise and downright fascinating films in their own regards. It’s the love for the franchise and fantastic last couple of entries that lead me to be completely baffled by Orion’s choice with a remake of the original film. The Chucky series isn’t done and the upcoming TV show by Mancini is easily on my top list of awesome things that I am looking forward to in the future. An unnecessary reboot/remake certainly wasn’t something that was also on that list.

Imagine the surprise that I felt when Child’s Play 2019 actually turned out…kind of good? Yes, surprise is certainly what I felt as this latest remake spins the classic horror film into a modern tale of childhood anxiety and technology dependence. Oddly enough, Child’s Play does not feel like a remake for the sake of a remake, but it truly is a new approach to the material and one that comes off as remarkably entertaining and, dare I say, fun. It’s gory. It’s quick paced. It’s intriguing in its use of modern style blended with classic slasher elements. Child’s Play is shockingly enjoyable. Count that as a huge surprise in this rather middling year for horror.

The original Child’s Play is a classic. I love it, but one thing about the original Child’s Play is that many of its elements feel dated. The use of voodoo, the overall use of a Cabbage Patch Kid/Teddy Ruxpin doll and even the now trope heavy blend of dark humor and slasher elements are all things that could be updated for a new audience. This is where Child’s Play 2019 gets things right. Initially the use of Chucky as an integrated “smart doll” with access to a variety of technology in our everyday lives feels like a gimmick, but it’s no more of a gimmick than the original trying to perform a voodoo ritual to transfer the soul of a serial killer into the body of a young boy. What this new approach allows the film to do is create new ways to build tension, scares, and kill sequences. Nothing quite beats a creepy looking doll with a knife threatening to kill a person, which Child’s Play does thankfully do in almost all practical effects, but the inclusion of things like how he can record conversations, set up Saw-like trap sequences, and control TVs, drones, lights, and cars adds a lot of new layers and interesting horror elements to the series. Strong use of outlandish deaths, practical gore effects, and traditional slasher set up and payoffs make Child’s Play a lot of fun for horror fans.

Where Child’s Play stumbles a bit is in the overall narrative. Thankfully, the film is brisk, clipping along at a strong horror pacing that doesn’t drag out too many things like secondary plot lines or adding in unnecessary moments that could have bogged down the overall plot. It’s the first act that struggles the most as it attempts to set up the more layered themes about single parenting in this current time or how kids can over-rely on technology to compensate for real social interaction. The performances are decent, particularly from the kids and with a special note of Gabriel Bateman as Andy, although Mark Hamill feels occasionally pinned by the more robotic lines of Chucky and he isn’t allowed to go as batshit insane as one would have expected. As the film starts to move through its narrative it does pick up the pace and by the time the final act rolls around, featuring a full-on kid vs toys battle in a department store, it finds its groove. Although some sequences tend to feel a bit forced into the narrative, including a rather darkly hilarious one involving the kids of the apartment trying to get rid of a ‘present’ left to them by Chucky, the effective charm and old school approach to horror entertainment make those flaws easy to digest.

A large part of me somewhat hates the fact that Child’s Play ended up being such a pleasant surprise. Mancini’s continued plight to create bold and new eras for Chucky is one that I have been behind 1000% since the ’90s and a reboot somewhat feels like it’s a betrayal of all of his hard work. Yet, Child’s Play is still a solid new spin for the franchise that takes it in some intriguing new directions that blend the old and the new. If anything, here’s to hoping that we end up with two franchises to support.