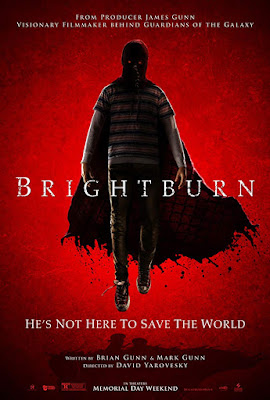 
Deconstructing superhero films is not necessarily a new thing, even in this day and age where the big-budget superhero flick dominates the box office with relative ease. Films like Super and Chronicle were easily breaking down the tropes into strange – and very effective – films for a while now. It was only a matter of time where someone decided they needed to make a superhero slasher film. This is where we get Brightburn, spurred on by producer James Gunn through his brother and cousin who wrote the film, which features some decent talent to attempt at tackling this premise. It’s one hell of a premise too. The high concept is readily on display in the film, where a young boy discovers he has the powers of Superman and then decides he needs to use them to destroy/take over the world. It’s almost too good of a premise, really. Thus explaining why the film has some issues taking full advantage of it as both deconstruction and a mainstream release.

Moment to moment, Brightburn works and it can deliver some shocks and sucker punches along the way. Even within a scene, one can see just how enticing this concept is as a film. Watching a pre-teen boy power his emotional instability with an almost indestructible body is terrifying. Not only is the idea of an ‘evil Superman’ a fun time to play with as we see the young man Brandon, played with a decent amount of variety and depth by Dunn, go through the usual kid issues like bullying, his first crush, and finding his own sense of self-reliance and then react in some horrific ways that leads to a rather impressive body count. The underlying subtext of deconstructing toxic masculinity is subtly injected in these moments, particularly as it relates to the idea of the “perfect” man in Superman as a parallel, and this is where the film finds its groove. Although the film gives its young lead protagonist something of a cop out that his anger and choices are guided by some unknown force which undercuts some of the depth a bit, Brightburn does have some intriguing ideas that it toys with here.

Execution-wise, Brightburn also features some fantastic set pieces. The performances are spot on, considering the rather intimate scale of the film to help promote the isolation tones of its horror concept, and that’s a necessary component for an audience to buy into the premise. Even the death sequences are well addressed and executed with the two major ones, the diner and the lone truck, being well shot and effectively layered with dread and wonder. The marketing made it clear how each one turns out, but there are a handful of surprises in how director David Yarovesky handles the material giving it a fascinating slasher bent that horror fans will enjoy. Best yet, the film does not shy away from giving brief glimpses of the sheer violence and consequences of many of the deaths. The film does not linger on the gore, but it does not edit its way around it either which was a pleasant surprise.

Despite the strong horror elements and decently effective use of the young man as a protagonist who struggles with his own morals and increasing power, Brightburn has issues in getting it all to be a cohesive whole. The emotional core is centered around the family dynamic and while the script does an efficient job at setting up later moments and plot devices it never feels like it finds the right narrative flow to get there. Some of that is due to pulling away from digging deep into character moments to keep up the efficient horror mainstream pacing. A sequence where the father takes his brooding super-serial killer son on a hunting trip could have been emotionally devastating and never quite reaches that moment of break, for example. Another potential thread that’s left hanging (potentially for sequels) is Brandon’s crush on a girl in his class that goes horrifyingly awry. It’s a major thread for the first two acts and disappears for the third. Ultimately, the film starts running through the motions too much to justify its horror and it even leaves the rather bold ending feeling a bit too hollow.


For an audience that is hooked by the premise, Brightburn contains enough interesting material to keep its audience invested. The performances are all strong, particularly from both Dunn and Banks, and the death sequences are effectively brutal and tense to deliver the necessary thrills. The hesitation crafted by attempting to make a mainstream release weakens the narrative strength of the film and the potential to fully deconstruct the superhero mythos is lost as the overall plotting to get from point A to point B continually gets int the way of the emotional cues. Brightburn lays the groundwork for an intriguing franchise and blends the two dominate genre films in some potentially fascinating ways though. If a sequel does come about, let’s hope that Gunn and company can take it further down the rabbit hole.