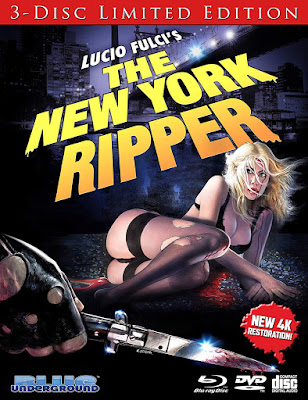 One of the problems about being a critic that focuses on cult and genre cinema is navigating the often overzealous fanbases. There are ravenous fans out there that even refuse to acknowledge the idea that a film (or films) have flaws despite their love for the film. This is fine. An emotional attachment to a film or some part of it is the essence of what makes cinema so fantastic. I love films that don’t deserve my unadorned appreciation. However, as a critic, it becomes problematic when reviewing a film that has an incredibly dedicated fanbase and the film is significantly flawed. Such is the case with Lucio Fulci’s brutal and sleazy giallo-esque The New York Ripper. Although the film has its own rabid fanbase, enough so that Blue Underground felt comfortable enough to re-release the film in a stunning new 3-disc 4K restoration, it’s hardly the perfect film. A patchy script is somewhat reclaimed by Fulci’s intense style and intention to push horror cinema at the time to some new extremes, but it’s a film where some of the bold choices feel awkward. This latest release is a stunner though, so fans of the film will more than likely – if they already haven’t – pick up this Blu Ray for the sheer effort that went into delivering the best version of this film.

Don’t mistake the opening of this review as a complete disregard for the better qualities that The New York Ripper contains. There is a valid reason this film has a dedicated following and it’s not just because of the extreme violence or sleazy narrative – although it’s those pieces that are often cited by fans as to why the film is entertaining. Fulci has always had a knack for visual punches and he does not hold back on this one. The gore sequences are intensely vivid and visceral in how they are shot and edited, lingering on moments for sheer intensity, and key moments within the film feature his unique ability to leap from dreamlike qualities to grim and gritty realism. A theater sequence in the second act is perhaps the highlight of his ability to direct a potentially cheap moment into an artful moment. This happens throughout the film. Fulci does not shy away from anything that might be taboo in the film, to a rather unintentionally hilarious degree in certain sequences. In those regards, the film must be lauded for its bold choices and relentless sense of intensity. For those with a weak stomach for violence or substantial sexual material, then it’s perhaps wise to go into the film knowing that it rarely backs down from potentially controversial content.

Not every choice that Fulci makes in the film works from a stylistic standpoint though. One of the bigger choices is to have the faceless killer sound like a poor Donald Duck impersonation while on the phone and while it ultimately is explained through a somewhat devastating finale, it’s so off-kilter that it feels uncomfortably funny. The New York Ripper also makes a very intense choice to give very few characters positive traits as characters. There is a sense of nihilism to the entire film that is relatively suffocating and it never really lets up, doubling down on the feel by the third act in a shocking way. Although it’s a bold choice, it does not make the film an overly balanced one either.

The New York Ripper also careens around the Italian version of slimy New York streets and it leaps from character to character to create an overwhelming web of deceit and mystery. It’s a giallo inspired series of murders that formulates a sense of discombobulation as it leaps through a variety of players in this game of brutality and it’s not always the most effective that it can be. With the previously mentioned nihilistic tone, there is no clear-cut protagonist of the film. The killer is the one that drives the action of the narrative and it’s a flurry of potential victims and police that are all reacting to those. The film regularly jumps “lead” characters and it undermines some of the more interesting elements crafted for them. The building of this web-like plot creates an intriguing narrative, but not necessarily one of the more engaging ones for a Fulci film.

For all of its big choices and problematic elements, The New York Ripper has grown quite the following of cinephiles under its big brutal banner. Blue Underground knows this and they have given fans the release to end all releases for their collections. This three-disc set is a beast. It features a CD for the film’s soundtrack (one of the best parts of the film, in my opinion) and the other two discs cover the film and bonus content. It’s a new restoration of the film, gloriously cleaning up the visuals to allow an audience to revel in the grimy material that blows away all other versions of the film. The bonus content is packed too with plenty of behind the scenes and film appreciation materials to warrant a double dip purchase for fans who already own a previous release. Blue Underground has upped the ante with their last few re-releases and The New York Ripper is no different. It’s meant to be a cornerstone of any cult cinema fan’s collection.

Although The New York Ripper has its strong elements including its realistic gore and Fulci’s strong sense of visual punch that he delivers in so many of the key sequences, it’s also a significantly flawed film that never finds the balance as it pummels its audience with weighted themes and odd and brutal exploitative set pieces. Fortunately, even for those who are not nearly as sold on the final product, this latest Blue Underground release is still a worthy addition to anyone’s collection. It’s so robust and well executed, that it overcomes many of the film’s flaws. The film gets a slight recommendation for Italian or cult cinema fans. The release gets all the recommendations in the world. 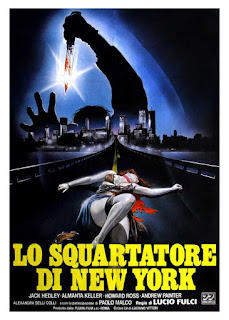