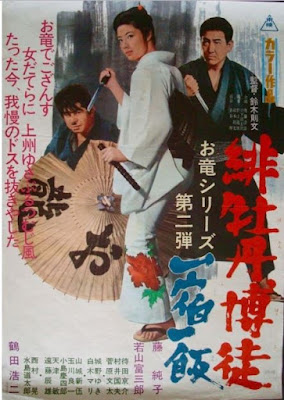 After the impressive debut of Oryu in Red Peony Gambler, the first film of this decently long classic yakuza franchise, there was a sense that it could be all downhill from there. The first film made such a massive impression, through performances and a sly script that added its own thematic weight to the usual ninkyo eiga, that a sequel was bound to disappoint in comparison. Well, maybe not. Red Peony Gamber 2: Gambler's Obligation is, on its own merits, an impressive follow up. The film starts off in a more traditional manner, often doubling down on the tropes of the yakuza film of the time period, but as it moves its way towards its conclusion the film continually picks up speed and delivers a third act that is both incredibly emotional and highly entertaining.

Gambler's Obligation, like its predecessor, adheres diligently when it comes to the tropes and requirements of the ninkyo eiga. The morally sound yakuza, personified by the titular lead - once again played with elegance by Junko Fuji, must fight back against the corrupted ethics of the evil yakuza while violence, romance, and politics complicate the entire matter. This time around Oryu, still a novice in training who wanders around through the various Japanese cities and villages helping out and learning the yakuza way, ends up caught between a vicious loan shark and the silk weaving people of a small village. The usual plot points all arise and the first half of the film tends to be fairly hum-drum in its execution of those. There is a sense that the numerous characters that are being introduced, a family in mourning that runs a carriage business, the wandering swordsman, the evil loan sharks, a rival female gambler, and the return of Tomisaburô Wakayama as his goofy character from the first film, are all pieces of a larger puzzle that is being set up, but the lacking sense of urgency makes it a rather mundane experience. It's fine, through this portion of the film, but Gambler's Obligation is obviously taking its time in getting things moving as it sets the table to deliver a multi-course meal of fights, deception, and wild narrative spins.

However, once Red Peony Gambler 2 starts moving forward, the momentum that it gathers is impeccably poignant. The way that all of the various threads come together in the third act is practically perfect in every way. There are a few moments where the convenience of the plot can be a slight stretch, but the energy that the film gathers is infectious. Entire sequences are replicated from the first half and brought to a close as it attempts to sort the various characters and plots into the main story. An early thread with the rival female gambler appears to be independent of the main story, but rest assured her re-appearance for a few scenes in the latter half carry a brutal and hefty weight to them as it bleeds into the main story. There are a handful of incredibly effective emotional sequences that resonate much deeper than expected too. Much like the first Red Peony Gambler, this one uses the gender of its protagonist in some surprisingly pleasant ways. Ways that do not require extensive nudity or forays into the pinky violence genre that would become expected of a film like this only a few years down the road. In particular, one sequence where our heroine flashes her peony tattoo to a devastated young woman gives the film the unique thematic weight that parallels the feminist attitudes of the original. It’s an emotional scene, underscored by the violence and corruption that they have seen splayed before them, and it works to be the highlight of the film.

Although Red Peony Gambler 2: Gambler's Obligation doesn't quite find the balance of traditionally entertaining classic yakuza films and the thoughtful interpretation of that with its lead heroine as its predecessor, this first sequel does have an incredible second half that is executed with impressive impact. The performances are strong, with a special note to Bunta Sugawara in a smaller role as the evil henchman, and the manner that the film weaves its relatively complicated plot is impressive. If this franchise can keep up the artistic strength of its first two entries, this is going to be a great series to review.