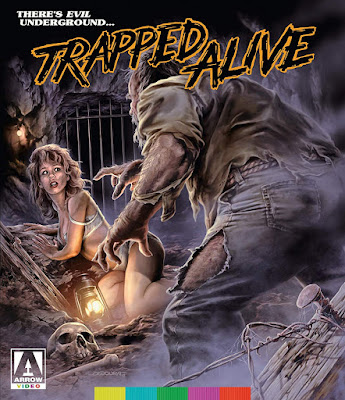 ‘Never judge a book by its cover’ is an overused phrase that too many people like to spout as if it’s an epiphany to all the questions in life. Still, it’s best to keep that in mind that often times the cover is not representative of the substance inside. Usually, this is a reference to how an ugly cover can hide beautiful content. In the case of Trapped Alive, it’s the opposite. When Arrow Video announced the film, they revealed this badass cover art (which is posted here at the beginning of this review) and I was sold. This just had to be some kind of glorious forgotten 80s slasher gem that I had somehow overlooked. Maybe it was a monster cult flick that deserved a second appraisal in a similar way that I found The Slayer a fun surprise? Unfortunately not. Despite an intriguing premise, Trapped Alive is a relatively slow and generic film that struggles to find its tone as it meanders around its narrative aimlessly for most of its runtime. With the cover art and fantastic set that Arrow Video put together, it’s a wonder if this film deserves the treatment it received.

The main plot and narrative for Trapped Alive is ripe for cult horror status. The film follows a group of individuals, three crooks recently escaped from prison, two young women on the way to a party, and a deputy sheriff as they become trapped in an abandoned mine that also happens to feature a cannibalistic monster man. It’s a simple premise, but with a bit of style and some fun sequences then Trapped Alive could have easily been one of those low budget horror flicks with a punchy narrative and some great key moments. Note: could have. It could have been.

As it would happen, Trapped Alive struggles with its identity. After a fairly stylish opening prison break and taking its sweet, sweet time to set up the various three sets of characters to be followed – prisoners, partiers, and police, the film falters on developing any sense of real purpose or momentum in its narrative. The process of setting up the characters drags on, potentially arranging a more intense and vicious film with the tension between the prisoners and the young women they take hostage, but the escalation of those dynamics rarely pays off. The performances are hit and miss in much of this first half, particularly as more layers are meant to be added to the characters, and director Leszek Burzynski doesn’t have the knack to ratchet up the tension needed through the claustrophobia, cold, or even the sense of impending death by either the criminals or the cannibal that pops up later in the narrative. The atmosphere wants to be slightly campy with some half-hearted jokes and the synth score that goes with it, but the rest of the film doesn’t match it. It's a tale of two films being slapped together. Trapped Alive struggles to find its pace and tone as it plods along to set up the main plot points and character beats. A low budget 80s horror flick should not be this uneventful.

Once the cannibal monster man shows up in the second half, far too late considering how he might have been used to create a further sense of dread for the audience outside of the few clues of his existence, then the film does start to pick up. Trapped Alive never gets to utilize him as much as it wants, obviously hindered by a lacking budget that seems spent on a few key sequences like a giant claw hook death or the eventual finale, and it’s a shame. Although the cannibal portion comes off as relatively predictable, there is some fun to be had and just when it starts to feel as though it might redeem itself the film is over. When it started moving, there are a few decent kills and a rather humorous reveal that tickles the fancy a bit, but it’s far too little and far too late to redeem the rest.

For a rather forgettable film, this Arrow Blu Ray is a stacked release that almost makes the film worthy of the purchase. The new 2K restoration is remarkably pleasant and the slew of various features add a lot more depth and context to the film than what’s presented on screen. Although I’m always a fan of director commentaries, it’s the inclusion of a commentary by The Hysteria Continues that probably takes the cake as my favorite feature – although the new making-of documentary is well put together as a feature and comes close.

Trapped Alive is one of those films that will garner a cult audience with time thanks to some bold choices in its narrative, like keeping its cannibal antagonist mostly out of the film until the the second half, and its relatively intriguing premise. For this, it makes sense that Arrow Video would be releasing it with all of the bells and whistles for those underground cinephiles always looking for the next thing to love from the undercurrent. It's probably why they made it pop with its fantastic cover art. However, Trapped Alive is a massively flawed film with an identity crisis and an inability to craft the pacing and atmosphere needed to sell the film - either portion of it with campy cannibals or a tense hostage survival situation. Cult cinephiles might enjoy it for what it is and that’s who I would recommend it to. The rest of y'all might want to consider other Arrow releases. 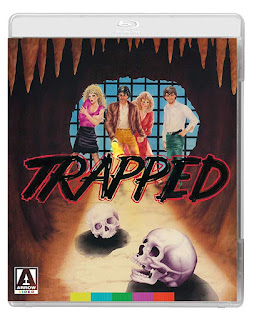 Written By Matt Reifschneider
Posted by DarkReif at 4:34 PM