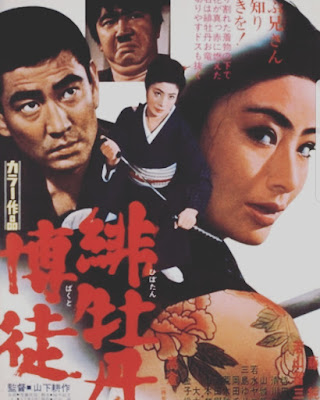 Telling the story of a young woman, an heir to a yakuza clan who sets off to wander the period set roads of Japan searching for her father’s murderer, The Red Peony Gambler hits all of the standard tropes of an action film of this era. It features a young and attractive star, a wandering anti-hero driven by key moral values, who attempts to correct the corrupted yakuza around her through her smarts and, eventually, her easy to access dagger. She meanders into other wandering characters and eventually stumbles into some budding yakuza turf wars which she helps settle. If you’ve seen a few other films of this ilk, you’ll fit comfortably into the world of our heroine, Oryu. Truthfully, the big stand out in concept is that the hero is female and the film does not let that idly slip by, but that is something to discuss in further detail later.

The period setting is gorgeous to look at, maximized by an impeccable use of “old meets new” concepts where the film’s main villain sports a western style suit or a heroine who isn’t afraid to pull a gun on her attackers who all shrink in fear through the beautiful sets. This sets the stage for the tightly woven script that sees almost all of the characters receive strong arcs and worthy moments. Even the cold open, where Oryu calls out a cheating dealer to earn the gratitude of a young man out on his luck, is something that is utilized again later in the film as both the man she helps and the man who is ousted for cheating come back to be valuable players in the third act. The film employs its intriguing characters to maximum benefit. Even a semi-comedic tangential sub-plot featuring the iconic Tomisaburo Wakayama (Itto from Lone Wolf and Cub) isn’t stand alone as that character would eventually get his own spin-off series known as Silk Hat Boss. Every interaction is relevant to the plot or the growth of Oryu as a character and she shares chemistry with everyone on screen, particularly another wandering anti-hero who might hold the key to the identity of the man who killed her father. Even with a strong lead in Junko Fuji (real name: Sumiko Fuji,) the film has so many great secondary characters and plots that it’s hard not to be swayed by one of them. I was sold on Oryu’s right-hand man, Fujimastsu the Immortal and his plot, but all of them work. In terms of script, everything has its place in this tightly woven narrative and it’s impressive to watch unfold.

Despite its incredible script and fantastically layered characters, The Red Peony Gambler takes a rather progressive stance on gender for a 1968 yakuza film. Most female lead yakuza films tend to lean towards exploitative turf, but the Red Peony Gambler series starts and ends before the Pinky Violence genre really takes hold in Japan. This is evident in how this first entry treats its lead and other characters. Dare I say that the film has a bold feminist angle at times? Although some of this is certainly up to interpretation, the fact that the film actively avoids having its lead shed her clothes to show her strength, a common occurrence in most Pinky Violence films, is a statement in itself. When Oryu bares her shoulder to flaunt her red peony yakuza tattoo, it’s a sign enough. She fears no man and will step up to the plate to challenge anyone who attempts to put her in her place as a woman. This includes a scene where another yakuza boss shares a cup with her in a brotherhood alliance, even though she turns down his engagement proposal and a scene where the villain attempts to humiliate her by having her pour his drink. She tosses it in his face claiming that perhaps this wasn’t what he expected of her or of his drink. Her interactions with a potential love interest are regularly gender-focused and at one point their argument reaches a point where his refusal to treat her seriously culminates in her demanding he treats her like a man. For a genre where the roles of men and women are normally regarded in a rigid fashion, The Red Peony Gambler feels like a breath of fresh air as it takes the tropes and refuses to have its female lead story regarded as a “gender switch” gimmick.

Although the film might be slower than some of its peers in terms of how the interactions and plotting plays out, only culminating in truly large action set piece for its finale (which does feature quite a few explosions courtesy of one of the heroes wandering around with a waistband full of dynamite,) the incredible tightness of the script partnered with a strong sense of character, performances, and execution of the visuals make The Red Peony Gambler a brilliant film. Not only is it one of the best ninkyo eiga I’ve seen in the yakuza genre, but it’s a standout film for how it challenges its own tropes in subtle ways.

Now I’m very excited to see what else the rest of the franchise has to offer.

Written By Matt Reifschneider
Posted by DarkReif at 9:59 AM