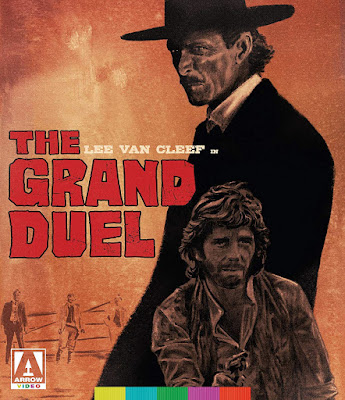 The Grand Duel has a fantastic first act. The audience is thrown into the middle of a tense stand off between a hidden criminal, the second lead of the film played by Alberto Dentice (under the name Peter O’Brien,) and a series of headhunters as a wagon full of bystanders approach the small area. It just so happens that one of the people in the wagon is ex-Sheriff Clayton, played with the usual steely eyes and black-suited regality of Van Cleef, who is also after the runaway prisoner. The immediate intensity of the standoff, powered by the charming cockiness of Dentice in conjunction with the all-knowing badassery of Van Cleef, is a delight to watch. The action is fun and abundant and even when the opening is done and the two gentlemen are paired up on a trip together to a small town there is a sense of intimate entertainment that makes the film intriguing in its mysterious plot and enjoyable in how it’s unraveling the narrative.

Of course, by the time the second act rolls around it starts to feel like a tumbleweed blown by the wind through a dusty location in the film. The Grand Duel starts to lose its mystery as the plot is revealed to be a rather mundane western blueprint script and the film muddles its narrative by adding in too many characters and not enough depth to them. What makes the two semi-heroes so interesting is that they are played as masks over different people in the beginning. The audience understands that neither are who they say they are in the performances, but as the film reveals their true natures that loss of mystery and intrigue is not replaced by dynamic storytelling or bold character choices (despite what the black and white flashbacks would indicate.) The film starts to fall into familiar ruts and director Giancarlo Santi, most notable for being Sergio Leone’s protégé of sorts, doesn’t quite have the knack to keep the narrative and tone of the film cohesive as it lays down all of its cards. By the time that the third act arrives, supposedly featuring the titular ‘grand duel,’ the film has lost most of its energy and feels as though it's going through the motions more than anything else.

As expected, this latest Arrow Video Blu Ray release is impressive as hell. The new 2K restoration is sharp and fantastic looking and for fans of the spaghetti westerns thee release has enough new interviews and features to satiate those cravings. Some particularly interesting tidbits on the release though including a comparison between the original cut and the German cut, a couple of new video essays, and a science fiction short film from 1984 (starring Marc Mazza.) There are hours of material here to sift through and watching many of the interviews add some great context to the film.

The Grand Duel features plenty of things to enjoy for western fans. As mentioned, the opening act, some strong performances like Horst Frank and the two leads give the film an edge on being entertaining. Its reliance on some fun set pieces will interest the more diehards of the spaghetti western fandom. For more casual fans, the film plays off better as a B-reel film rather than the main attraction for its over-reliance on tropes and generic villains/political conspiracy plot points. It struggles through much of the second and third acts to find its narrative strengths and overly relies on the performances to carry the weight of the story. The Grand Duel ends up being a mixed bag. Fortunately, the release itself is beyond fantastic. It’s brimming with new features and the restoration is pristine. For those fans who even remotely enjoy the film, this release is worth the addition to the collection. 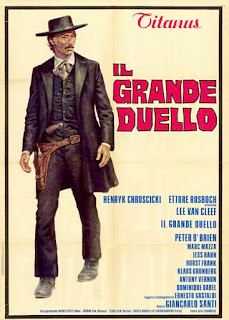