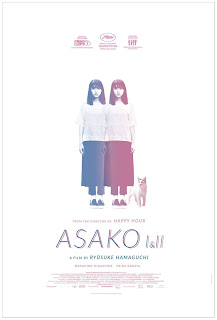 Before I delve into this write-up, I want to say if you know nothing of this film's narrative synopsis or even the bare minimum and wish to go in blind, then I suggest just that. I knew nothing going in and it heightened the surreal experience overall. Now, continuing on, Asako I & II follows around the titular Asako, a college student who stumbles on to a man named Baku at a photography exhibit one day. She is immediately drawn into his attractive features and at once finds her self in love. Just a brief moment of eye contact sparks a mutual bonding between these two strangers. 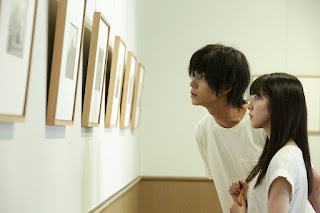 Sometime later, Baku vanishes without a trace and Asako finds herself alone, that is until two years later when she happens upon a man named Ryohei, who bears an uncanny resemblance to her previous love. The physical attraction takes over as she finds herself asking the man out and falling in love all over again. As I said before, revealing too much may potentially soil a first time viewing experience. The plot, as intricately designed and weaved into the overall fabric of the narrative as it may be, does take a slight backseat when in comparison to the stunning visuals and performances.

One thing I almost never mention, as apparently it just isn't something I typically draw my attention towards, is the score. The 80s inspired synth reminiscent of the style of the score used in something like a John Carpenter film, although not near as dark sounding, pulses brilliantly throughout, echoing the state of mind of Asako as she spirals emotionally through the inner workings of such a complex relationship, all realized beautifully by the sensational artist tofubeats. 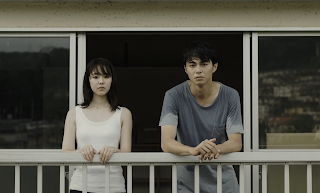 It's exciting to write about a piece of work as passionately crafted as Asako I & II, but with that excitement comes caution for fear of potentially hindering someone's initial viewing experience. So, if you've read this far I most certainly hope you've seen this film already, or if you're that rare individual who sticks to last paragraphs first, do see it immediately. A brilliant and different kind of love story as told by a contemporary master of the medium.