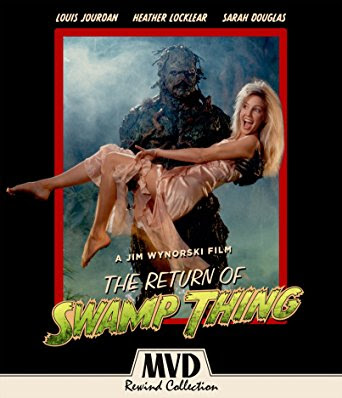 As a sequel to the first Swamp Thing, Return does take things even further into light hearted territory. Despite the actors that portrayed our hero and villain returning for the film, the tone takes a bullet shot into pure cheese territory with little regard in how it will play out in the long run. This kind of off the cuff manner does create a lot of hilariously awkward elements to the film. There’s an entire subplot featuring two kids living in the swamp that become obsessed with our hero and it’s a fluff plot, really. Yet, it’s so awkward, the kids are so terrible at acting, and it’s played up for some really silly gimmicks that it weirdly works. That’s how this film is. It’s so awkward that it works. Heather Locklear immediately falling in love with Swamp Thing? Sure. The overzealously energetic and slapstick head of security who only operates at 110% of what is needed in every moment? Alright. The film has such a strange sense of humor. It does not care if something works or doesn’t as long as it’s a punchline to its silly plot. So take EVERYTHING with a grain of salt.

If there is anything about the film that truly does work it is that The Return of Swamp Thing uses its setting, costumes, and visuals to maximize the silliness of its tone. Again, the suits are often a mishmash of ideas and the film has to limit what it has for its budget, which doesn’t allow it to fully run with some of the fun ideas of genetically crossed human/animal hybrids like it could have, but there are a lot of fun elements in there. Each of the actors play their roles with a sense of hammy seriousness that works with the tone of the film. Both Dick Durock (Swamp Thing) and his nemesis Louis Jourdan (Arcane) bring a sense of grounded acting the entire spectacle and it’s a strong parallel to much of the secondary cast and the really ditzy and snarky character that Locklear plays. Again, as with everything in this film, either you buy in or you fold. Even the better parts of the film may not be enough to sway those who aren’t willing to bite.

For the record though, for those B-cinema connoisseurs that do love these kind of tongue-in-cheek genre benders from the 80s, this latest Blu Ray is worth it for the collection. Not only for those looking to complete their upgraded Swamp Thing franchise on their shelves, but the film looks impressive in its remastering. On top of that it features a slew of new interviews and a brand new commentary from director Wynorski to go with a previous commentary from him that’s ported from 2003. It’s a packed release and cult movie buffs are going to want to dig in for that reason alone. If the film only gets a two and a half rating, this release gets a strong four and a half score.

In the end, as much as I did enjoy (and laugh my ass off) re-familiarizing myself with a film that graced my childhood, The Return of Swamp Thing is the kind of film that will split audiences. Either you buy into the light-hearted and very cartoonish elements of the film or you find them offensive to the intellect. There is not much in-between. As a critic, it’s hard for me to ignore the formulaic plotting, ill-advised character arcs, and obvious set up/punch lines of the narrative, but even then the film does a remarkable job making all of its flaws fit into the tone. A feat that should be respected in some regard.