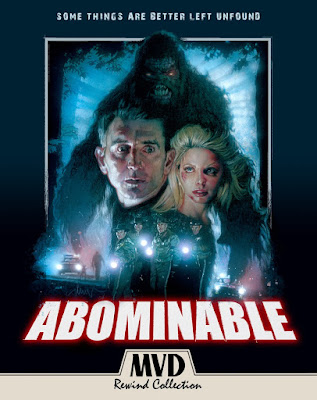 Initially, once I put the new MVD Rewind Blu Ray copy of Abominable in my player, I was concerned. The look of the film, despite some decent direction in key moments and some impressive gore effects (more on that later), is very early 2000s low budget. The new 2K transfer is decent, but this film, at least initially, wears its budget on its sleeves and it is concerning with its digital look and smaller scale. Don’t let that fool you because director Ryan Schifrin certainly knows where to put the budget to appeal to horror fans and that becomes apparent as the film moves on.

Narratively speaking, Abominable is fairly formulaic and pulls heavily from the 80s creature feature blue prints to fuel its momentum. The use of isolation in cabins, a traumatized hero who must overcome his fears, a troupe of college age girls in peril, and an unreliable authority around them all feed into the tongue-in-cheek style of the film. Abominable is like Rear Window meets a monster in the woods film. Pretty simple. In many ways, the film is predictable, particularly as it starts to hammer down on the ‘squatch action in the second act. That being said, the film is having so much fun with the formula and giving audiences enough to wink at that it continues to work well above and beyond its means.

A prime example of this is how the film uses its cameos. Like many lower budget modern horror films, the use of cameos is employed to garner some attention to the film by fans and distributors, but most of the famous cast have little more a handful of minutes of screen time. Abominable is LITTERED with cameos and, outside of a fairly generic one for Wallace in the opening sequence, they work within the formula. In particular, there is a subplot featuring a hunter, a local farmer, and a local small-town gas station clerk that are out hunting the titular creature. It’s narrative padding used to create an early scare before the main yeti-siege occurs in the latter half of the film and normally would be eye-rollingly predictable. Yet in this film, it’s a highlight sequence thanks to the inclusion of both Jeffrey Combs and Lance Henriksen just bickering at one another. The film knows that they are here in the film for this reason and it lets them just have fun with it, hamming things up and delivering the most outrageous dialogue and one liners. This is why Abominable works so well.

This sense of self-realizing fun is further punctuated by the use of the monster in the film. It’s almost completely executed with practical effects and it uses the sheer fun of its overly serious portrayal of characters in increasingly silly situations to balance it all out. The monster itself has a fantastically tongue-slightly-in-cheek design and there is one kill where he bites someone’s head that is simply worth the purchase to see. Not that the other kill sequences aren’t just as fun, no window is too small for a massive monster, but there are some spectacularly awesome sequences of gore that any horror aficionado will want to see at least once.

On top of a massively entertaining gem of a low budget horror film with its self-aware attitude, this latest Blu Ray release by MVD Rewind is packed with plenty of features for the collectors out there. Featurettes, audio commentary, outtakes, deleted scenes, and a couple of short films from director Schifrin’s early career litter this release. The new 2K transfer is solid and, as a bonus, there are two different cuts to the film on it. I’m not sure anyone attached to this film would have ever guessed it would get this kind of pristine release, but here we are and it’s a wonderful addition to the horror fan’s collection.

In an effort of being honest, I thought perhaps MVD Rewind was reaching when they announced a 2005 low budget horror for their line up, but Abominable might be one of my favorite discoveries of the year. The film is hardly good in a traditional film critique, but it has some much fun and energy underneath its budget that the flaws of its formulas and cheesiness only add to the experience. Perhaps most cinephiles would find it silly, but cult cinephiles are going to dig into what Abominable has to offer.