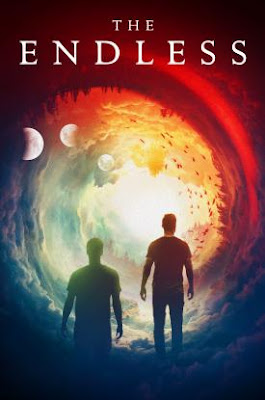 Initially, it’s hard for an audience to digest what is being fed to them in The Endless because the film is hard to pin down stylistically or with any one genre. This is something that directors Moorhead and Benson have always been able to maximize with all of their films, but where a film like Spring found a balance in just two or three genres, The Endless is one that runs the spectrum. The main idea is grounded in a lot of science fiction concepts, particularly those leaning from the early Twilight Zone or Outer Limits episodes (if Jordan Peele doesn’t hire these guys for his upcoming Twilight Zone reboot, I’m going to riot in the streets), but the film does not hesitate to quickly slide into comedic elements, horror set pieces, fantasy tones, and indie dramatic spins. This can be hard for some audiences to consume, but if you’re willing to settle into the narrative than this film impressively navigates the trenches and pitfalls of each genre with relative ease.

In parallel to that, Moorhead and Benson take some fantastic risks with the film. One assumes when the film uses the description to its plot as ‘two brothers return to the UFO death cult they escaped previously,’ then there is going to a gradual build to some intense alien action. Well, maybe. Truthfully, The Endless plays things a lot looser and vaguer than the kind of imagery and expectations that its description would indicate. The build of the film goes in that direction, particularly through the use of the mystery on hand that pushes our two protagonists back to the cult and the strange elements that continually pop up while they are there, but don’t expect a lot of answers to be had in the end and instead just understand that one of the quotes that the film opens up with is from H.P. Lovecraft. That’s a huge indicator to the kind of film that The Endless ends up portraying.

As mentioned, the biggest concern going into The Endless was that Moorhead and Benson would be leading the way as the two lead actors in the film. Maybe it’s the years that they have spent working together that helps, but they anchor the film fantastically as the two brothers returning to their past. Their chemistry works on a multitude of layers, whether its dramatic or comedic bantering, and they interact with the slew of secondary characters with remarkable ease, particularly when they are separated in the second act to go on their own missions of discovery. The entire cast is on point though and as the film spirals further and further into stranger and stranger territory, it’s the execution of the performances (along with the fantastic atmosphere) that is able to carry the weight of the film.

The combination of genre bending tones, a vague and often dramatically focused narrative, and impressive direction from Moorhead and Benson make The Endless one of the best films of the year, no matter what genre you want to try and peg it down in. It’s mind bending with what it is offering its audience, the intimate setting provides some truly unnerving moments and ideas, and the chemistry in its cast is impeccable. For those willing to leap into the film with an open mind, it delivers on almost all fronts and in a variety of categories. At this point, Moorhead and Benson are three for three and The Endless might be their most ambitious yet.