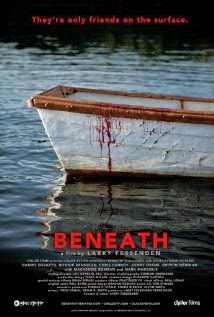 While the low budget horror genre contains a lot of ridiculous ideas and even sillier films, I’ve always been partial to ‘killer fish’ flick. I’m not entirely sure why to be honest, but the charm of this usually awkward sub genre can have its merits. I went into Beneath with hope that it would be one of those gems you find in the cheap bin that’s worth the price just for enjoyment. Unfortunately, Beneath is about as generic as its title would indicate and despite some solid enough ideas, fails to make any sense in its plot.

Johnny (Zovatto) and his friends are just finishing up high school and their futures hang in the balance. As a way to sort some issues out between them, he takes them – including the girl (Dennison) he has been pining over forever – out to a lake on his family’s land. Rumor has it that a monster lurks beneath the surface of the serene water…but the biggest danger may lie inside the boat.

Beneath certainly had potential as a low budget flick and director Fessenden had the right idea with how to go about it. Instead of focusing on jump scares, Beneath desperately tries to really cake the film in suspense and atmosphere instead. Partnered with some stellar physical effects (not going to lie to you, but the killer fish, as simple as it was in concept, looked pretty awesome for low budget), this idea about paranoia and how fear can turn the best of friends against one another could have worked. Could have. Unfortunately, for every moment of potential there were some issues that plagued the film to the point that I lost interest about half way through.

Right away, we know that Beneath is going to be the film that sticks to the formula. Even the characters fit the cliché horror caricatures to a ‘t.’ The arrogant jock, the smart kid, the film student (so they could get in some first person POV for shits and giggles), the possible lesbian, the popular girl, and the outcast. These clichés work for a reason in many other films, but for this one none of them really felt real and the acting ranged from surprisingly solid to wince worthy.

From there the plot just added to the winces. Honestly, I haven’t seen a film where the kids made as many poor decisions as this in a very, very long time. I know teens can be stupid (I was a stupid teen once, I think), but there is no way that they can be this stupid. The entire idea of voting someone out to be food for the fish so the others could slowly paddle the boat might have worked once, but after that it becomes seriously redundant no matter what gimmicks they try to throw in. It also didn’t help that much of the conversation and bickering was haphazardly throw in with the characters. In one moment, the jock is heroic and the next he’s acting like stubborn 3-year-old. The quick shifts just didn’t work for the film.


There was definitely potential for Beneath as an atmospheric, character driven low budget horror flick. The problem is that the tone shifts disrupt the atmosphere and the characters are cliché and poorly built into a script that does nothing for the audience to relate to them or their ordeals. As is, I have to give Beneath a big recommended ‘skip’ for its issues. I mean, unless you want to see people arguing over a kiss behind the gymnasium and a googly eyed fish with  a bottomless pit for a stomach. This one is a huge missed opportunity.