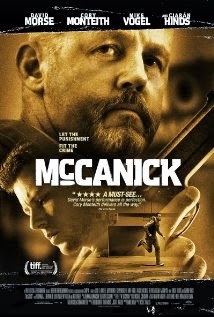 Cop dramas can be a dime a dozen, but with some solid execution even the most mundane and cliché riddled script can be a decent flick. Take McCanick as a prime example. It’s a script we have seen a billion times before, but luckily director Josh C. Waller and an exceptional cast allow McCanick some breathing room to really bloom into a film worth the time to watch. It’s not going to be for everyone with its darker subject matter and characters that never blend into black and white, but for those looking for a solid cop drama then it works.

Eugene McCanick (Morse) has been on the force for a long time and seen his fair share of questionable incidents. With a new rookie cop as a partner and a looming attempt to rekindle a relationship with his son, McCanick seems to have things moving in the right direction. That is until a young criminal (Monteith) gets released from prison early and threatens to uncover a dark secret from McCanick’s past that could put everything in jeopardy.

One of the biggest love it or hate elements is how relatively plot un-driven McCanick comes off as with its heavy handed character focus. With a plot that plays it like a very safe and subtle version of Bad Lieutenant at times with a cop and his seemingly questionable morals that’s spiraling out of control, the film tends to bypass any truly great plot progressions for character beats. Even the twist at the end, when we fully realize the dark secret that McCanick has buried, it feels more like a character motivation than a true epiphany for the audience. Too often, particularly in the second act, my interest started to wane for the film as it seemingly slow burned its way towards any kind of end game.

To McCanick’s benefit, the film has two very powerful artistic forces to help propel the rather bland script towards something greater than its foundation. Director Josh C. Waller has a knack for the atmospheric and the heavy subtle moments for a character (as I also described as a plus in his women in prison film Raze earlier this year) and his ability to inject some visual energy into the film really helps it move along. He carries a rather old school style to his direction that gives the film the occasional 70s thriller vibe that does work and something as silly as a chase through the alleys in the third act takes on a rather intense atmosphere to it.

Partnered with Waller’s touch is a phenomenal lead performance from David Morse as the titular protagonist McCanick. While there are some solid enough secondary performances that add to the mix including a rather intriguing role for Monteith of Glee fame prior to his death, nothing seemingly touches Morse’s gray and deep rooted moments of thoughtful (and thoughtless) character leaps. If there was truly an MVP for McCanick it would this role and performance that is a right hook I certainly didn’t see coming.

McCanick in the end is still a rather basic and formulaic drama-thriller that rarely sees the foundational script rise above anything we haven’t seen before. Had it been released 40 years ago it might have dropped some jaws with its subject matter and approach, but in 2014 it comes off as a bit too cliché. If you are going to delve into McCanick do it for the young talent of Waller and the stunning lead performance from Morse. That’s where the highlights lay.