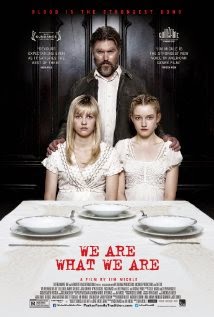 Jim Mickle certainly took the world by surprise with the quality of his ‘rat zombie’ flick Mulberry St and then took the horror world by storm with the epic and atmospheric post-apocalyptic vampire tale Stake Land. Both films are widely regarded as modern horror classics in many circles, so when his next project was announced to be the remake of the underground hit We Are What We Are I think quite a few of us were found scratching our noggins. Mickle, not to be taken lightly as a man with eye for the horrifying, not only does the film justice with his tweaked version, but he improves on the original film.

A family living on the outskirts of a small town has suffered a tragedy. The mother of three was found dead while on a trip for some supplies in a terrible storm. The father of the family is grief stricken, but vows to keep the roost at their best. So he begins to train his two young girls to carry on the family tradition of hunting, cooking, and eating the traditional meal…people.

I was never truthfully sold on the original We Are What We Are. It was good and there were some great moments, but it lacked some of the punch to really kick it to the next level. Mickle’s We Are What We Are does suffer a bit from the same fate, but he seems to handle the simple concept of the film with a more artful touch and the changes that are made make for a film that ultimately comes off as more impactful in the end.

Perhaps the best aspect of this version of the film comes in Mickle’s damn-near-patented atmospheric touch. With genres like rat-zombies and post-apocalyptic vampire hunters, Mickle has already proven to be a man with the ability to inject atmosphere into damn near anything and the overcast and world-heavy dreariness of a family in mourning plays right into his strengths as a director. Partnered with an unbelievable cast loaded to the gills with subtle performances and some bursts of horrific plot progressions, We Are What We Are is executed to almost perfection. The film is spun in a way where the audience isn’t necessarily appalled by the concept of the story until it wants us to be… which makes for a rather effective film experience.

I have to admit though, there were times when watching We Are What We Are that I felt like the tension was drawn out too much and some of the film was too subtle. I love atmospheric horror, but there were times in this film that I really wanted something to happen sooner as it took its sweet, sweet time getting there. The romantic subplot between the deputy and one of the daughters is one of those times as it comes off a little light in the end and I felt like it could have had way more impact with a bit faster (and perhaps tighter) pacing.


All in all, We Are What We Are is a great horror experience for fans. It’s slow-burning, but much of it is worth the time and effort for the viewer to invest with as we watch a family slowly unravel and their secrets come to life in the down pour of rain. It’s not the goriest film (although Mickle makes a few sequences squeamish with great editing and sound), but it’s delightfully horrifying in all the right ways. Comes highly recommended.